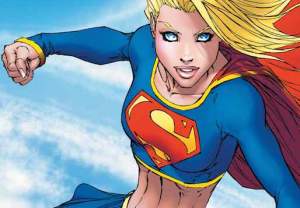 Supergirl should fly just fine on CBS, despite the initial perception that she’s an odd fit amid the network’s countless procedurals.

Speaking at the Television Critics Association winter press tour on Monday, CBS president Nina Tassler called Supergirl “a real passion of ours,” saying, “We heard the pitch and realized she embodied so many of the qualities and characteristics of the classic female heroines on the network. It’s a story and coming-of-age opportunity for us. We fell in love with the pitch.”

As for how a fanciful superhero drama will “fit” on CBS’ procedural-filled line-up, Tassler explained to TVLine, “We’re watching an evolution with regard to the way superhero characters are portrayed. There’s a humanity, they’re flawed, there’s a relatability. These are all things that made [Supergirl] imminently relatable and made the story exciting, made it an adventure.”

Other topics tackled by the Eye network’s boss at TCA:

* Given its shortened season, the imminent arrival of the Cyber spinoff and Ted Danson snatching up hiatus work (on FX’s Fargo, which begins filming after CSI Season 15 wraps), some assume the long-running crime drama is due to expire. But Tassler maintained, “We haven’t determined yet what’s going to happen with CSI. The show continues to be a strong performer and does very well in its time period. You look at the journey that the show has gone on [with assorted cast changes over the years]…. We’re just incredibly proud.”

* With a new Criminal Minds spinoff in the works, what lessons learned from the short-lived Suspect Behavior might be applied? “Do it better,” Tassler deadpanned. She then hailed Criminal Minds showrunner Erica Messer, who’s been a part of the series “since Day 1” and is writing the backdoor pilot, as “an extraordinary writer and one of the best showrunners in our business. That is one of the key differences from our previous spinoff,” which was helmed (at the start) by Chris Mundy.

* As suggested by the casting shake-up for Extant Season 2, “We are making some changes in terms of the mythology of the show,” Tassler shared. “Molly (played by Halle Berry) will be much more proactive, and the threat to her world and home life is going to be much more focused on at the beginning [of the season].”

* Though Amazing Race took an expected ratings hit with its Friday move, Tassler touted it as  a “beloved unscripted franchise,” noting that in DVR playback it “did well.” That said, the show’s producers have been tasked with “turning up the creative changes” to keep things noisy in its new home.

* Of The Millers‘ somewhat surprisingly truncated sophomore run, Tassler said, “We gave [the show] a terrific launch last year, and we’re enormous fans of Greg Garcia…. It just didn’t take off [in Season 2]. It was a tough call.”

* Tassler declined to address rumors that Charlie Sheen will return for Two and a Half Men‘s series finale, only echoing series creator Chuck Lorre’s promise of to deliver “a mystery sandwich”

* Fun fact: Tassler said that CBS was never in talks as a possible Dallas savior.