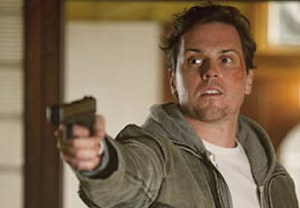 Nine apparent lives and all, the cat is (sigh) out of the bag.

A serial killer, Tyson first appeared in the Season 3 episode “3XK,” and then seemingly bid this mortal coil adieu in Season 5’s “Probable Cause,” when the psycho plunged off a bridge after Rick shot him several times. The villain’s improbable return was hinted at last season, when a pair of eventual murder victims cosmetically altered to look like Espo and Lanie stole all 3XK files from the 12th’s records room.

* MTV is bringing back America’s Best Dance Crew for six new episodes slated to air this summer. Though some dance crews from previous seasons will return, the judges’ panel will be made up of new faces.

* In other MTV news, the second season of Finding Carter premieres Tuesday, March 31 at 10/9c.

* NBC has given a pilot order to Warrior, a drama from writer/executive producer David DiGilio. The pilot follows a “damaged” heroine who goes undercover with help from a “mysterious” martial arts master in an attempt to “bring down an international crime lord.”