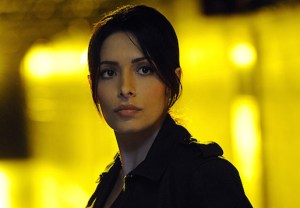 When Sarah Shahi revealed to her Person of Interest bosses that she was expecting (twins!), their reaction to losing a key player went from an initial “Oh, s–t” to an opportunistic “Oh, yeah!”

Because, they tell TVLine, the CBS drama had been looking to off a major character this season. “We’re not making that show” where “nothing happens,” showrunner Jonah Nolan explains.

On the heels of Shahi sharing her own story about how her pregnant pause gave birth to a shocking twist, Nolan and co-showrunner Greg Plageman here discuss the team “turmoil” ahead for Shaw’s teammates, that pair of unexpected liplocks, the mystery “bang” and a possible (semi-?)resurrection.

SPECIAL DELIVERY | Echoing what Shahi has shared, Nolan says that when she first came to them early in the season with news of her pregnancy, “In a weird way she felt ecstatic and yet conflicted, and we just wanted to put her mind at ease and say, ‘No matter what, we’ve got your back and we’ll find out a way to do this, and do it well.” In fact, Plageman says that over time, “[Our reaction] went from, ‘Oh s–t’ to ‘OK’ to ‘Oh yeah, now were rolling with it.’ It’s tremendous dramatic fodder.” Because….

DEATH WISH | The Shahi sitch paved the way for the producers to pull the trigger on a big twist they had planned. “We knew we were going to kill a character off this season, and had started soliciting bribes from the actors… but Sarah was willing to take one for the team,” Nolan shares with a laugh. “It’s always great to have an opportunity, as we did last season with Carter, to build around a major event in the middle of the season. On so many shows, for so many years, nothing happens. You check in on your kind of ‘surrogate family,’ and everything’s nice — ‘Hey, there’s cousin Marv! ‘There’s the wacky neighbor!’ But we’re just not making that show, so any excuse for mayhem is seized upon.”

KISS AND TELL, PART 1 | In The Machine’s simulated Option No. 833,333, Fusco steals a kiss from Root, and Shaw doesn’t show up for the final shootout. But when the detective doesn’t help himself to some sugar, Shaw does later ride to the rescue. Possible, improbable correlation? “It’s the butterfly effect!” Nolan jokes. He then alludes to the lesson Finch taught The Machine, 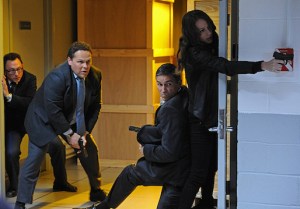 saying, “There are more possible chess games than atoms in the universe, and when you add the element of human nature to it, it gets that much more complicated. It’s impossible for the Machine to predict all circumstances,” such as a frisky Fusco. Besides, that kiss — as well as the “Simplified Simulation” that had the characters amusingly speaking dialogue in shorthand — “adds a level of levity in a really hard-charging, heavy episode,” Nolan explains. “My favorite moment is after Fusco kisses Root, the look she gives is pretty classic. It sums up that element of levity that we needed.”

KISS AND TELL, PART 2 | Echoing one of Shahi’s several perspectives on the Shaw/Root smooch, Nolan says, “She knew if she didn’t do something in that moment, she would never get Root back on that elevator.” Plageman meanwhile allows there may have been more to it. “Shaw, who has no feelings, plants one on Root and in the moment right after that gets a sudden hit of, ‘Wait a second, I did feel something.'” But what that “something” is might never be revisited. “We’re not that kind of [relationship drama], so we won’t get a chance to explore that,” he says. Instead, “We get to explore what Root looks like with a rocket-propelled grenade launcher.”

A SHOT IN THE DARK | Was the episode-ending, cut-to-black bang a gunshot or, as a few have suggested, merely the elevator door slamming shut? Nolan plays coy: “I don’t know — what did you think?” Informed that closed captioning denoted “[Gunshot],” they react with a roar of laughter. “Is that right??” marvels Plageman. Grumbles Nolan, “We spent half an hour at the sound mix making that [indeterminate] sound! You can’t read the closed captions, those people are renegades! They’re writing their own damn show.”

THE MOURNING AFTER | Promos show Team Machine seemingly grasping onto the notion that Shaw is still alive and out there somewhere. Plageman cites the “TV rule” that “because you haven’t quite seen a [dead] body,” there’s of course hope. 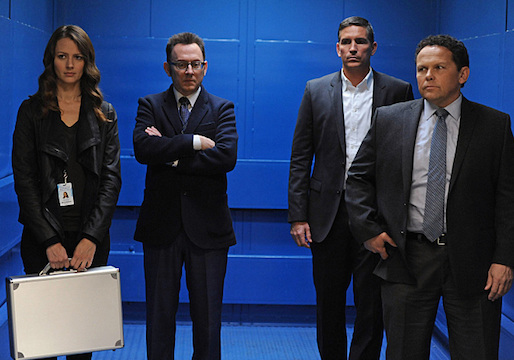 More pragmatically, he admits, “We like to keep people guessing.” Whatever the case, Shaw has been lost and, Plageman says, “Obviously Root’s not too happy about it — and a pissed-off Root is not something you want to be dealing with.” For her, Finch et al, “There’s a certain amount of turmoil in terms of figuring out how to proceed from here.”

TRILOGY OF TERROR | So what is ahead as POI wraps its midseason trilogy this Tuesday night? Plageman describes the episode, titled “Control-Alt-Delete,” as “a hard left turn. Camryn Mannheim (as Control) is very prominent in this episode, and we’re going to see what lengths our guys are willing to go to to avenge Shaw.”

MANY HAPPY RETURNS…? | What is the gentleman’s agreement between POI and Shahi, as pertains to her possible, post-partum return? (In at least one interview, the actress suggested she might put her career on hold for two years.) For the foreseeable future, “Sarah’s got her hands full,” Nolan acknowledges. “But we love her, and we love her character on our show. So just as soon as she is up and ready to jump back on our show, she’s coming back — but whether that’s for a flashback or not remains to be seen.”