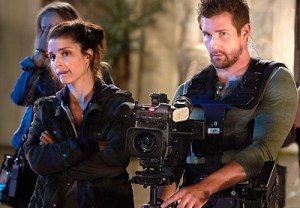 Just like every rose has its thorn, The Bachelor‘s ugly truths are about to be exposed.

Lifetime’s upcoming drama UnREAL will go behind the scenes of a fictional dating-competition series titled Everlasting, where the producers (played by House of Cards‘ Constance Zimmer and Life Unexpected‘s Shiri Appleby) do not hesitate to manipulate and lie to get the best footage. It’s a world with which co-creator Sarah Gertrude Shapiro is familiar, having worked on the aforementioned ABC reality hit. But how much of the new series’ backstage drama is true to life?

“We took the world and stuffed it anecdote-ly — we’ve heard from all kinds of sources — and we made stuff up,” co-creator Marti Noxon revealed at a Television Critics Association press tour panel on Friday. Noxon said even those who don’t love reality fare will like the Lifetime series, because “it uncovers stuff that they suspect about [the genre], that it isn’t as real as it seems.”

“It feels like every character is an antihero,” she continued. “You see them try to do better, but circumstances take them back.” And in the world of reality shows, “there’s constantly the devil on your shoulder asking you to go down the wrong path.”

Appleby described her character, a young production staffer, as someone who’s “really good at doing something — producing reality television —and that thing is actually what she hates about herself. She’s constantly at struggle with herself.”

As such, Shapiro said she believes anybody with a job will relate to UnREAL‘s big question: “How do you stay yourself and respect your morals as you become an adult?”