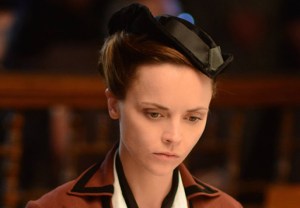 Christina Ricci once again will star as Borden, the real-life woman who was tried (and acquitted) in 1892 of murdering her father and stepmother.

“It’s a fictionalized version of what happens after the trial, as she continues to misbehave,” Ricci said of the eight-hour series. “This is an imagining of what could have happened.”

So, how did Ricci prepare to inhabit such a dark role once more? Easy: It was fun.

“I never expected to play her again, but she’s really fun in this interpretation,” Ricci said. “This version of her is actually a lot more satisfying. She has a sense of self-awareness. But at the same time, we do deal with the complexities and emotions behind what created this monster.”

Will viewers find themselves rooting for Borden, much like Dexter and Breaking Bad viewers cheered for those antiheroes? Maybe, says director Stephen Kay.

“There’s an element where you don’t understand why you’re rooting for her, but you are,” Kay said. “But in the same breath, you’re going, ‘Someone freaking stop her.””

Will you tune in to The Lizzie Borden Chronicles? Hit the comments with your early thoughts on the series!