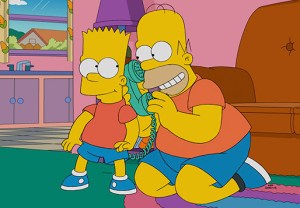 Writer-director Judd Apatow (Bridesmaids, Girls) can officially add “Simpsons scribe” to his resumé this Sunday — and he owes it all to being a hoarder.

Sunday’s episode, in which Homer becomes Bart’s new best friend after being hypnotized into thinking he’s a 10-year-old boy, was written as a spec script by Apatow in 1990 during the show’s first season.

TVLine spoke with Apatow and Simpsons executive producer Al Jean about Sunday’s throwback episode (Sunday, 8/7c), its two-decade journey to the screen and whether it could mark the beginning of a beautiful writing partnership.

TVLINE | Maybe I’m clueless, but I’ve never heard of this happening before. Sunday’s script was really written almost 25 years ago?
APATOW | You know, it was a surprise to me, as well. At the time, I was living with Adam Sandler in North Hollywood and six episodes of The Simpsons had aired. In order to get a job writing for a sitcom, you had to write a spec episode of a show that you liked, which is very hard to do because you don’t really know how the show works. A lot of people would write a Mad About You, or a Murphy Brown, and that would be their writing sample.

TVLINE | I would love to read your episode of Murphy Brown.
APATOW | [Laughs] Exactly.
JEAN | I actually had a Golden Girls [spec script]. … It was one where Dorothy had an auto accident with Mother Teresa and everyone hated Dorothy.
APATOW | Did you get the job?
JEAN | No, they hated it. [Laughs]

TVLINE | The show’s comedy has definitely evolved over time, but since this script was written in its earliest days, will this feel like an old episode?
JEAN | I think it has a little bit of a feel of an older episode. We’re always trying to think of simple story lines. Judd did an interview recently where he mentioned a story where Homer’s hypnotized into thinking he’s 10 and be becomes Bart’s best friend, and I thought, “My God, why aren’t we doing that? That would be great!” So we asked him if we could buy it. It’s harder and harder to find those simple through lines, so we just wanted to do it.

TVLINE | And where was this script, just yellowing in someone’s filing cabinet?
APATOW | I had it in deep storage; my wife and I are always debating whether I’m a hoarder and should be on that show Hoarders.
JEAN | It was written in a language that no longer exists. It needed to be translated.
APATOW | It was written with my disc of AOL that I got through the mail. I save everything, and I feel like my payment for this episode paid for years of storage facilities for everything else I’m hoarding. 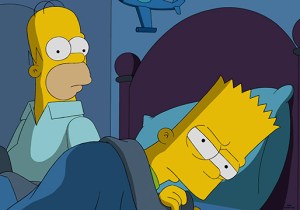 TVLINE | This sounds like a nice bonding episode for Bart and Homer. Does it peel back another layer of their relationship?
JEAN | I think so. Those actors [Dan Castellaneta and Nancy Cartwright] are so great that you just want to find a reason for them to interact, as they did in this case.
APATOW | When I wrote it, the show had only been on for six weeks, so it felt like something I wanted to see. At the beginning, a lot of it was about Bart getting in trouble with his dad, so at the time, the idea of them bonding seemed new. I’m sure they’ve done it 1,000 times since then.
JEAN | A lot of people ask when we decided not to make Bart the star of the show anymore, and it was never a star; we just sort of gravitated to Homer. Soon, it’ll be Grandpa. [Laughs]

TVLINE | Might this lead to another episode written by you in the future?
APATOW | If I can think of one and get the courage to pitch it to them. I used to call Phil Rosenthal and try to pitch him Everybody Loves Raymond episodes, and every time I did it, he’d say, “Oh, we’ve already done something like that.” Finally, I gave up, but maybe I’ll work up the courage to pitch story ideas again.
JEAN | Raymond? Now that’s a good credit!
APATOW | I know, I wanted it so bad! I had a really good one; I’m going to turn it into a Girls episode now.
JEAN | That’s what we did with my Golden Girls script — we turned it into a Simpsons episode.

TVLINE | At the very least, you need to do live readings of those rejected spec scripts.
JEAN | If you own your stuff, you can do whatever you want with it!
APATOW | Honestly, one of the highlights of this experience was watching Al and everyone at The Simpsons work. I was in the room at The Critic when they were starting that up, and I was always so impressed with how much patience everyone had to make every single moment of the show great. They would sit on a joke for an hour, and it really taught me a lot about hard work and setting a really high bar. I found it exciting to see that everyone at The Simpsons is so fully engaged. The show’s been on for a long time, but when you go over there, it feels like it’s only been on for three or four years.