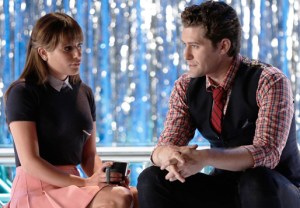 “They say you have to lose everything before you can really find yourself.” These haunting words from Rachel’s dad fit perfectly with Glee‘s final season premiere, as Friday’s return redefined what it means to hit rock bottom.

Picking up several months after last season’s oddly hopeful finale, the two-hour premiere introduced several major setbacks for Ms. Berry: Not only is her career in the toilet — That’s So Rachel managed to offend every single special interest group, including NAMBLA — but her dads are also getting a divorce. Still, rather than power through the obstacles in her path, a message Glee has always stressed to its viewers, Rachel decided to tuck her tail between her legs and return to Lima.

Also on the outs are Kurt and Blaine, the latter of whom is now working as the coach of the Dalton Academy Warblers, following his depression-induced expulsion from NYADA. (You can read more about Kurt and Blaine’s love life, including my personal rant against their new story line, a little further down.)

Thankfully, and against all logic, the original members of New Directions — Quinn, Puck, Santana, Brittany, Mercedes and Artie — were more than happy to drop whatever they were doing to return to McKinley and help Rachel and Kurt rebuild New Directions, much to the chagrin of Principal/Dictator Sue Sylvester.

Now, let’s break down the specifics of this week’s occasionally baffling premiere… 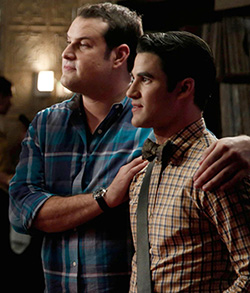 KLAINE-OFSKY | Without question, the premiere’s biggest game-changer was the revelation that, not only have Kurt and Blaine called off their wedding — things got tense when they lived alone in the loft — but Blaine is now in a relationship with Karofsky. Yes, Karofsky. Rant alert: I’m all for temporarily splitting up Kurt and Blaine for dramatic effect, but the notion that either of them would date Karofsky after everything they went through is preposterous. And the very idea of Blaine thinking Kurt would be A-OK with them all hanging out together is kind of an insult to the fans who have endured their relationship’s many ups and downs over the years. In fact, Kurt bawling his eyes out in the Scandals bathroom was probably the only logical emotion any character exhibited this week. Am I wrong?

HOMEWARD BOUND | Ignoring for a moment that flying to Ohio for Homecoming would be nearly impossible for several of the show’s OGs, it was great to see the ol’ gang reunited. Sam attempting to get back with Mercedes (“Are you still a virgin?”) was hilarious, the two performances from the Unholy Trinity were flawless and the obligatory joke at Tina’s expense (“You said you’d wait for me to park the rental car!”) left me feeling warm and fuzzy all over. And while I would have preferred for Glee to incorporate more of the newbies from two seasons ago — Jake, Marley, Ryder, etc. — rather than introducing us to a crop of students we’ll only know for 11 more episodes, I’ll take what I can get. 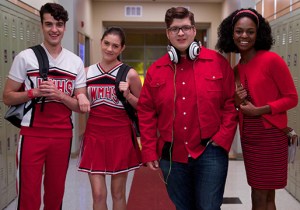 THE NEW RECRUITS | Speaking of newbies, Glee‘s final season premiere also introduced the five students upon whose vocal chords New Directions is being reborn: There’s Spencer, a “post-modern gay” who’s apparently allowed to call his football teammates “whiney homo”s without consequence; Jane, Dalton Academy’s first female student, who joins Rachel’s crusade after being rejected by the Warblers; Roderick, a perpetually bullied rocker (Sue calls him “White Precious”) who treats his oversized headphones like a comfort blanket; and the “incest twins,” Mason and Madison, who double as Cheerios. (Side note: “Incest twins” is Kitty’s nickname for them, and I really hope that’s not something to be explored down the line.)