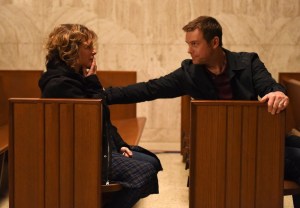 Even though Parenthood reached its pivotal 100-episode milestone on Thursday — syndication, baby! — the Bravermans were hardly in a celebratory mood.

In fact, this week’s hour was one of the family’s most harrowing yet, leading Camille to say the very words about Zeek we hoped she wouldn’t: “I don’t know if he’s going to make it through this.”

Got your tissues ready? Let’s recap what went down in “How Did We Get Here?”.

PAPA, DON’T LEAVE | The hour picks up right where November’s fall finale (rudely) left us: while Zeek is suffering a heart attack. One by one, the Braverman kids are called to the hospital, but once there, they’re given hardly any information about Zeek’s status. (Random thought: Is every TV doctor required to say, “We’re doing everything we can” at some point?) The lack of intel — combined with the trauma of watching Zeek lay motionless in bed — is too much for Camille, and she takes to the hospital’s chapel for a good cry. When Adam finds his mom weeping, he tries to reassure her that everything will be okay — but Camille finally admits that a much more grim outcome is possible.

Ultimately, Zeek’s prognosis is bleak. After suffering another heart attack while in the hospital (which will surely scar Julia for life, since she witnesses it) and having stents inserted, Zeek’s heart is simply “not as strong as it needs to be.” So, he’s got three options: 1) Go back into surgery to fix his faulty heart valve — easily the most dangerous scenario; 2) Leave his heart as is and run the risks of another heart attack, a stroke or a number of other terrible incidents; 3) Take some time to rest up, talk with the family and then make a decision. Even though Camille is prepared to talk it over with the kids, Zeek confesses that he wants the choice to be made by him and his wife alone. 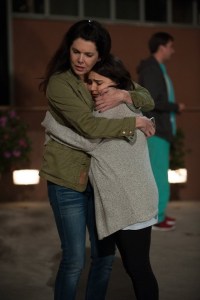 Still, Zeek’s latest hospital visit does have a silver lining: It gives Drew a chance to patch things up with his grandfather, after the teenage Holt is wracked with guilt for spilling Zeek’s travel plans to Camille. When Amber and Drew are able to visit a recovering Zeek, Drew wastes no time in hugging it out with him. (Full disclosure: Drew’s earnest, “I love you, Grandpa” got me seriously misty.)

LET’S STAY TOGETHER | You know who else earned a small victory in this week’s episode? Those of us on Team Joelia. After the couple is seen in bed together (I know this is hardly the episode to celebrate, but still — yay!), Joel shows up at the hospital and stays by Julia’s side the entire day. He’s there to provide coffee for the whole Braverman clan. He’s there to translate all the medical jargon when Julia is too flustered. Basically, his transformation back into Good Guy Joel is almost complete — and even Julia admits that they’re on the way to getting back together. (All together now: FINALLY.)

* After someone breaks into The Luncheonette and completely trashes the place — I’m betting it was Alexandra Daddario’s Rachel, who’s still not over her unrequited love for Adam — Crosby and his brother discover just how big their insurance payout would be, should they decide to cash out and dissolve the business: $20,000 each, with enough money leftover to give Amber severance pay. Seems like a pretty sweet deal, yes? For Adam, totally. For Crosby… not so much. He’s not willing to give up on his dreams just yet, and when he tells Adam as much, the elder Braverman says… absolutely nothing in protest. (This is on you now, Adam. I adore you, but it’s totally on you.)

* Hank stays at the hospital to support Sarah (and also because Joel is there to support Julia, which doesn’t seem like a great way to justify things). Although it’s clear that he doesn’t quite fit in with the Bravermans — yet! — he admits to Sarah that he’s all in with their relationship… and proposes! The timing isn’t super (nor is the location, as someone gets wheeled by on a stretcher right as Hank is feeling romantic), but Sarah doesn’t say no. She doesn’t say yes, and she wants to talk about it later, but that sure isn’t a no. Put this in the win column for Hank….?

* Since Zeek’s health scare derailed plans for Amber’s baby shower, the Braverman/Trussell/Graham ladies bring the soiree to the hospital cafeteria instead. (Who needs ambiance, anyway?) Each mom at the table reads a page of parenting advice that she’s written for Amber, and I must confess, this scene has already earned a spot on my Top 5 Favorite Moments list (which, admittedly, no one cares about but me). When Sarah reads — well, attempts to read — her words of wisdom, it’s clearly an emotional moment for Lauren Graham and Mae Whitman as much as it is for their characters. Join me in an ugly-cry, won’t you?

Your turn! What did you think of Parenthood‘s tearjerking 100th hour? Grade the episode via our poll below, then hit the comments to back up your choice.