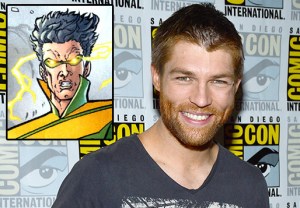 Spartacus‘ leading man is causing quite a storm on The Flash.

Liam McIntyre (Spartacus: War of the Damned) has been cast as Mark Mardon, the new Weather Wizard, on the CW series, TVLine has confirmed.

The actor appears in Episodes 15 and 16 when Mark returns to Central City to get justice for his brother Clyde’s death at the hands of Detective Joe West. Just as his sibling could control the weather, Mark will use his powers to go on a rampage to find Joe.