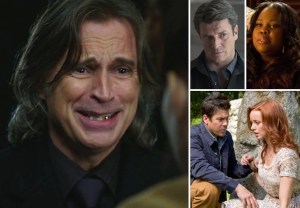 Will Once Upon a Time’s Rumple and Belle ever reunite? Is private eye-ing good for Castle’s “private” life? Is Glee‘s Mercedes due for a romantic encore? Which Five-0 fave is in muy trouble? Read on for answers to those questions plus teases from other shows.

Are Once Upon a Time‘s Rumpelstiltskin and Belle ever going to be together again? –Ann
Or, does the pursuit of power come with a price? When I invited the series creators to take us inside Rumple’s mad-for-magic mindset, Eddy Kitsis explained, “Rumple let us know in Season 1 that he’s a difficult man to love. And he’s let us know that he always chooses power over love, that is his fault. But he began the season with honorable intentions — he really was going to give Belle the knife – but when he saw the [Sorcerer’s] hat, that made him realize, ‘I did the noble thing and it ended up with my son dying and me being a slave. So if I can never have to wake up and worry about someone getting my dagger, why can’t I have everything?’ And as he learned, you can’t.” But to more directly answer your Q, Adam Horowitz offers this: “Rumple and Belle] have been through a lot together, and despite how it may have felt in the midseason finale, their story is not over.”

Any spoilers about the upcoming episode of Castle? –Fred
Monday’s episode — the first in which NYPD outcast Rick hangs up his shingle as a P.I. — is a tremendous amount of fun, though in a way that can’t exactly be replicated on a weekly basis (for however long Rick winds up going solo). The “competition” between Beckett’s team at the 12th and Rick plays out in a highly entertaining way, as each entity tries to out-scoop the other — or, at one point, tries to coax intel over copious amounts of red wine. (Along those same lines, the good-natured rivalry also feeds into one of the first “Wait, what did they do?!” bed scenes in a while.) Will Rick save the day in a way that gets him back in Gates’ good graces? How does Perlmutter react to Rick rummaging in his office? And who at the 12th does the best Rick Castle impersonation? You’ll get those answers and more.

Hi, I wonder if you have some info about Castle‘s February two-parter. –Kosma
Though past two-parters have pivoted around extra-special guest stars a la Dana Delany, Adrian Pasdar, James Brolin and Lisa Edelstein, that won’t be the case this time around. Outside of returning guest star Annie Wersching (24), as 3XK fangirl Dr. Kelly Niemann, showunner David Amann says, “It’s going to be mostly our people dealing with a big case that comes their way.”

Do you have anything on Looking? I’m dying while waiting for it to return. –Annie
Look for Richie to re-enter Patrick’s life in a surprising way. Speaking of Jonathan Groff’s lovably naive alter ego, a seemingly harmless rash sends him into STD panic mode.

Do you have any scoop on Grey’s Anatomy? –Kelli
One of the doctors will be involved in a car crash in Episode 15 – not that such a thing would slow down a healer! Rather, the doc – though pinned down herself – coaches a young girl in the wrecked car near hers on how to diagnose and help her mom!

Got anything interesting on Hawaii Five-0‘s Danny? –Sarah
Episode 18 sure sounds interesting, seeing as Danny finds himself locked up (and beaten up!) inside a Mexican prison. Even more worrisome: The phone call he is granted to secure cash to pay off a guard, he instead uses to say (gulp!) goodbye to Grace.

What can we expect for Mercedes in the upcoming season of Glee? Will she get a happy ending? –Alzeath
While it’s safe to say that every gleek will receive a happy ending this season — or at least Glee’s version of a happy ending — Mercedes’ future remains a bit of a mystery. What I can tell you is that a certain ex-boyfriend is still very much interested, and he’ll make his first move in Friday’s season premiere.

Can you give me anything new on the final season of Justified? –Matt
I’m now three episodes in, and just got done watching a very entertaining verbal volley between Raylan and Boyd, one of whom totally has the other’s number. Thus far, it looks to be the lean, mean final season that I wished for, laser-focused on the two fellas and Ava, who’s desperately caught in the middle (but isn’t afraid to suck down lotsa bourbon in the name of self-preservation). Of the guest stars, Garrett Dillahunt is sufficiently menacing (and not in an OTT, affected way, like some past villains), while I can’t wait to see more of Sam Elliott’s character.

Can you give me any info on Chicago P.D.? –Miriam
If you by chance saw Enlisted alumna Angelique Cabral’s tweet about guesting on the NBC sophomore, I can reveal that her character comes into Intelligence to help on a case. She worked vice with Antonio (played by Jon Seda) years ago, and at the time there was a mutual attraction. Now that he’s going through a divorce… hmm, who knows?

I love Bellamy/Clarke together on The 100 — is there any chance these two will finally get romantic? There is so much sexual tension there! –Katrina
Finn was always intended to be Clarke’s primary love interest, but now that he’s out of the picture — sorry, it’s time we all accept it — there could be a chance for Bellamy to swoop in. “Never rule that out,” executive producer Jason Rothenberg says of a Clarke-Bellamy pairing.

Please tell me The Librarians is going somewhere with Jake and Cassandra’s adorable chemistry! –Ashley
It may come down to the wire, seeing as the TNT drama has only two freshman episodes remaining. “Stone and Cassandra have a very complicated relationship,” exec producer John Rodgers tells the Inside Line. “They are going to get closer, but how close before the end of the world (and season) is a good question.”

Just curious as to whether you have any information regarding the new series Killjoys coming soon on Syfy? –Shannon
Though a premiere date has yet to be announced, production on the 10-episode space adventure — which stars Hannah John-Kamen, Aaron Ashmore and Luke Macfarlane – is well underway.

Got any scoop you can share about Abby’s boyfriend on NCIS? How long might this relationship last? –Robert
Showrunner Gary Glasberg told me that with the Sergei Michnev story heating back up as well as other fish to fry, “We step away from [Abby’s romance with Burt] for a little while” — though not for forever. “Everybody really likes having [Johann Urb] around, so I’m sure you’ll see him again,” Glasberg shares, adding: “It’s been nice to have everybody kind of in pleasant relationships!”

Anything for Reid coming up on Criminal Minds? – Diana
All I can squeeze out of sources fight now is that Dr. Reid is due for “a great, emotional arc in Episodes 13 and 14,” airing during February sweeps.

I’ll take any info you have on Law & Order: SVU. –Shavawn
Once you can get past the idea of fresh-faced Dreama Walker as a police detective, tonight’s episode offers one of those compelling looks at how law enforcement officer’s who know better don’t always take the best steps toward getting justice served. Kelli Giddish does some great work as Rollins reflects on a dark part of her past, while Harry Hamlin (returning as Rollins’ former Atlanta PD boss) hints at some Phillip Stroh-like slitheriness.

Will Suits‘ Katrina come back, or is Amanda Schull too busy with 12 Monkeys now? –Christine
At the very least, Schull found time to pop up in the Season 4 premiere, which finds Louis before her on bended knee, popping a question.

Real questions, real answers. If you need the Inside Line on a favorite show, email InsideLine@tvline.com! (With reporting by Andy Swift and Vlada Gelman)