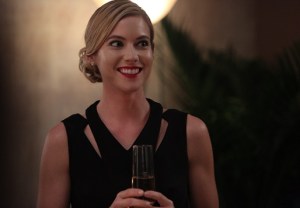 The premiere of VH1’s new original series Hindsight on Wednesday took viewers on a time-traveling journey – but did you enjoy the trip down ’90s memory lane?

Before you chime in with your thoughts, a recap of the pilot: Becca (White Collar‘s Laura Ramsey) is about to get married for the second time to quintessential nice guy Andy (Super Fun Night’s Nick Clifford). He’s sweet, responsible and thoughtful. “But did he set me on fire? Well, I was warm,” Becca’s voiceover reveals. She finds herself reminiscing about the past, including her hunky, unpredictable ex-husband Sean (Legend of the Seeker‘s Craig Horner) and her best friend Lolly (Elementary‘s Sarah Goldberg), whom she hasn’t spoken to in 10 years.

After an encounter with a mysterious, Buddha-quoting stranger (Revenge‘s Collins Pennie), Becca passes out in an elevator and wakes up in 1995 on the morning of her first marriage with Ace of Base’s “The Sign” blaring on the radio. She doesn’t realize what’s happened at first, simply wondering where the Keurig went. Then she starts to put two and two together when she sees that her divorced parents (One Life to Live‘s Brian Kerwin and Resurrection’s Donna Murphy) are still together.

Becca hightails it to Lolly’s – “It’s really you,” she says in wonderment – before trying to convince her pal she’s from the future, where she’s about to marry family friend Andy Kelly.

“I know he was dorky, but he got cute. The same thing happens to Patrick Dempsey!” Becca explains. 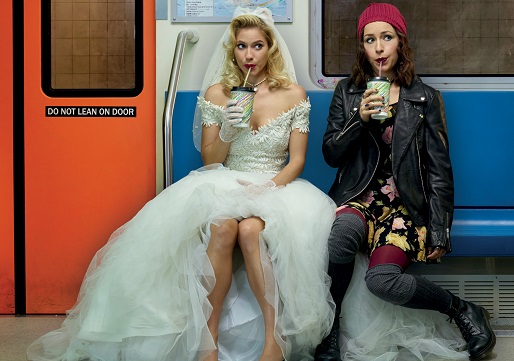 Lolly is dubious and concerned until Becca reveals that she knows her BFF has the clap and slept with her brother Jamie (John Patrick Amedori, aka Gossip Girl‘s Aaron Rose) last night – two pieces of information she couldn’t possibly know unless she really time traveled. After donning her clogs, knee socks and favorite leather jacket, Becca goes to visit her first hubby-to-be Sean. When they got hitched, they were “so in love and so crazy and so stupid. God, he was hot,” she thinks. And a trip to the past means she gets another chance at the best sex she’s ever had. But the afterglow doesn’t last long as she starts to wonder if their marriage sets them both off course.

“You can only ever make one decision, so every decision you make sets you off course,” Sean replies.

Although he has a bad temper, is unpredictable and resented Becca for supporting them, Sean is not an entirely bad guy. He decides to fight for her, asking her to marry him again. “I want to be worthy of you,” he says. Becca, however, is still worried that they’re “destined to make the same mistakes over and over again.” Even as she’s walking down the aisle, she’s full of doubts. But what if she and Sean are meant to be? She has so much more information now. “I could change him. I could change me,” she thinks.

It’s still not enough though to convince her to repeat the past, so she runs out of the church with Lolly, declaring, “I want to do things different, starting with you and me.” (To that end, she doesn’t tell her what their big falling out was about – we just know it was related to something Becca said to her bestie in 2003 – hoping to avoid it.) But it’s not so easy to hit restart, especially when Sean shows up at the bar.

If VH1’s I Love the 90s and the Canadian import Being Erica (which briefly aired on SoapNet) had a baby, it would be Hindsight. My love for Erica is well-known, and the VH1 drama’s premise shares many similarities with that series, mainly a time-traveling heroine with regrets (who it will be revealed in Episode 2 is stuck in an assistant job at a publishing company much like Erica). Not to mention, the mysterious stranger who also shows up in the bar in 1995 sure does seem like he shares a book of quotations with Dr. Tom. But that only made me like Hindsight more because, let’s face it, there aren’t a lot of series that are about looking inwards, friendship, fate and choice. And the show has its own charms like its appealing star and the friendship between Becca and Lolly. Plus, I am a sucker for nostalgic 90s references/music/clothes/you name it, and my goodness, there were loads in the pilot, from Lolly’s despair over AOL’s unfashionable future to the terrific soundtrack.

Will you revisit Hindsight next Wednesday? Grade the premiere via our poll, then hit the comments to back up your pick.