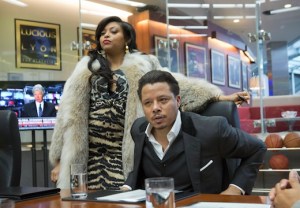 Woman walks into a boardroom.

Nope, that’s not the setup for an old-school joke you don’t want to hear — not when you’re watching Fox’s Empire, and the woman in question is Taraji P. Henson’s Cookie, the baddest (and most quotable) bitch to swill scotch, grab her gun before answering her door, love her kids unconditionally (while occasionally beating ’em with a broom) and threaten her two-faced ex with total corporate annihilation.

“You messin’ with the wrong bitch.” “For a queen, you sure do keep a messy place.” “What I want is some respect!” Those are just a few of Cookie’s greatest hits — and Henson, who controls every scene like an East German Olympic swim coach in a kiddie pool (circa 1972), proves to be the magnificently entertaining linchpin to this soapy story of a hip-hop dynasty on the brink of an IPO (or possibly a complete and total collapse).

Here’s the setup: Terrence Howard plays Lucious, a hip-hop mogul taking his company public, while preparing to pass his torch to one of his three very different sons — business-minded Andre (Trai Byers), closeted crooner Jamal (Jussie Smollett) and (horribly dressed) immature playboy rapper Hakeem (Bryshere Gray, aka rapper Yazz The Greatest). There’s a definite sense of urgency to Lucious’ mission, too, since he’s just been diagnosed with ALS and his doctor’s are giving him only three years to live. Plus, his ex Cookie has just gotten out of jail on drug charges after 17 years — an illegal business that provided Lucious with $400,000 in seed money for his music biz — and has come to collect her bill.

WHAT WE’RE GONNA DO IS GO BACK… WAY BACK | The action intersperses between present day and flashback, with the most harrowing peek into the past centered on Jamal. We see him as a grade-school boy, trying on his mother’s heels and scarf, a revelation that sends homophobic Lucious into a rage and causes him to throw Jamal into a metal trash can (before he’s rescued by an utterly aghast Cookie). Jamal’s sexual orientation isn’t a mere subplot here, though: It’s quite possibly a launching pad for the show’s central Cookie vs. Lucious showdown. Which leads me to…

A TALE OF TWO BROTHERS | While Cookie quickly learns her initial seed money (and the sacrifice she made in going to prison) won’t get her 50% of the company, it does land her a low- to mid-seven-figure salary and the right to manage Jamal (who’ll get no support from his father unless he pretends to be heterosexual). With Lucious taking the reins of Hakeem’s career, the pilot leaves us with both talented young men on target for potential superstardom — and a fight for the kind of record-company resources needed to make those dreams come true. Even more interesting? Jamal and Hakeem are clearly devoted to each other — the scene where Jamal whips up a piano line for Hakeem’s latest rap is one of the most riveting in the entire hour — but will their love hold up as they’re used as pawns in Cookie and Lucious’ war? Andre, for his part, sees a Jamal-vs.-Hakeem title fight as his surest path to the CEO chair (or at least that’s his point of view after his wiley wife suggests it).

RIGHT-HAND MAN WITH A PLAN | Not enough drama for you? The hour ends with Lucious putting a bullet in the head of his childhood friend and bodyman Punky, who betrays his boss and threatens to expose Lucious’ prior murder of four drug dealers unless the now-legit businessman gives him $3 million to square up his debts.

DID WE MENTION THE MUSIC? | Like Season 1 of Nashville, a good chunk of Empire‘s allure comes from its ability to mine drama from the process of writing, recording and marketing music. The opening scene — in which Lucious wrings a more potent performance out of a gorgeous songbird by reminding her of a tragedy from her past — is a whopper. But it’s Jamal’s plaintive “Good Enough” and Hakeem’s “That Ish Right There” that make believable the idea that Cookie-Vs.-Lucious is a war with real stakes (and real millions to be made).

ETC, ETC, ETC… | Lucious, Andre and Jamal all have romantic interests who look like they’ll be intriguing players as the season progresses — and Malik Yoba’s Vernon clearly has past beef with Cookie (and a manipulative streak with all the players) that could turn him into the Big Bad of Season 1. Still, no matter where the action goes, let’s hope the writers don’t forget that Henson excels at Big Diva Moments like Cookie crashing Lucious’ board room as he preps his inner circle for their IPO maneuver.

“Don’t forget to thank your Cookie on this historic occasion!” she coos. That line applies not only to the scene in question, but to the entire series, too.

What did you think of Empire? Grade it in our poll below, then sound off in the comments!