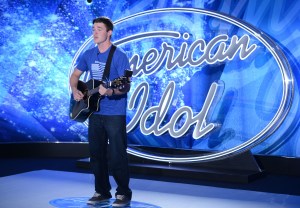 American Idol is determined to discover a Carrie Underwood-level superstar in 2015 — as the show’s promotional tour and ad campaign keep reminding us — but it probably wouldn’t be bad for ratings if it managed to land a fourth husband for Jennifer Lopez, either.

I’m not trying to besmirch the good name of the Artist Formerly Known as an In Living Color Fly Girl. After all, she’s the one who commanded flirty 20-year-old Michael Simeon to take their slow dance from middle-school chaste to senior-prom snuggly all while he crooned Sam Smith’s “Stay With Me” during his Nashville audition.

“I’m a great wife and girlfriend — I just pick the wrong f—ing guys!” J.Lo groused good-naturedly to fellow judges Keith Urban and Harry Connick Jr., after Simeon exited the room with his Golden Ticket. Hey, that’s not a bad opening line for a Match.com profile, come to think of it (though a better selling point might be the discerning “no” vote she gave to the night’s initial auditioner).

But this is not The Bachelorette, people! And while the Season 14 premiere confirmed that Fox has no extensive renovation plans for The House That Kelly Clarkson Built, it did remind us that said structure can be a warm and very lovely place to relax for a few hours a week from January to May.

With that in mind, let’s weigh in on the seven hopefuls who are bound for Hollywood Week after tonight’s one-hour launch — ranked in order from least- to most-promising. (Side note: One-hour audition episodes are kind of the best, are they not?)

7. Amber Kelechi Walker, “Heartbreak Hotel” | Cute girl from “the hard part” of Memphis wins the episode’s consolation prize for Heart-Tuggingest Backstory, but her lack of breath support had me humming a different Elvis tune: “A little less shriekeration, a little more control, please/ Too much time on backstory makes my brain want to seize…“

6. Priscilla Barker, “Delta Dawn” | Self-described “spunky” 19-year-old’s Tanya Tucker cover was mostly in tune, but might’ve benefitted from some Sudafed to deal with its intermittent nasal quality. As Judge Lopez noted in her dissenting opinion, “it needed to be a little more special.”

5. Cam Bedell, “You Are the Best Thing” | This waiter from a Mexican restaurant sounded soulful and solid (albeit a wee bit predictable) covering Ray LaMontagne (aka Patron Saint of Gravel-Voiced Soul Men on Reality Singing Competitions).

4. Kory Wheeler, “I Can’t Make You Love Me” | I really, really hope TMZ doesn’t post a story tomorrow that Kory didn’t actually work for a full year at the coffee shop across the street from the Nashville audition site — but instead paid off the manager the day before his tryout in order to create a more interesting backstory. (Coming up on your local news at 11: Is reality TV turning you into a cynical monster?) In any event, though, while I wasn’t quite as gaga as the judges over his crumbly, plaintive tone — not with the limitations he showed when reaching for the high notes, anyway — I’m curious to see if the glitches were a matter of nervousness or faulty technique.

3. Emily Brooke, “Blown Away” | Lanky 15-year-old proved that work ethic won’t be her downfall, seeing how she played gigs nearly every weekend to pay for her trip from Wellington, FL to the Nashville tryouts. Better still, she managed to deliver the booming country hit with true emotion and not a hint of the shrillness that often trips up lesser vocalists attempting to scale Mt. Carrie Underwood. Special bonus: No Randy Jackson around to yell, “Dude, she’s only 15!”

2. Riley Bria, “Georgia Woods” | I loved the sweet, final run Riley plunked on to the end of his cover of a Keith Urban album cut — and the fact that his reedy vocal tone was a little different from the Idol country-dude norm. (Side note: Wouldn’t it be great if the Season 14 kids gravitated more toward b-sides and shoulda-been-hits?) As the judges noted, the kid who’d once accompanied Keith on guitar at an awards show (thanks to a Grammy Foundation summer camp connection) commanded the room with the kind of effortlessness it takes to fill a larger stage.

1. Michael Simeon, “Stay With Me” | Charming Ole Miss student displayed a tone so smokey and delicious, I’d like it added to the menu of the local Mexican place I’m supposed to be swearing off as part of my new “Eat Healthy in 2015” resolution. OK, yeah, his “will you dance with me, J.Lo?” shtick was the extra layer of melted cheese we did not need atop our quesadilla — sorry, the stomach wants what the stomach wants! — but better to possess a little extra swagger than to fade into the wallpaper like so many Season 13 fellas. (OK, you can say that was a low blow, but can you give me the first and last name of more than three of ’em without the help of Google?)

On that note, I pass the mic to you! What did you think of the American Idol Season 14 premiere? Grade it in our poll below, vote for your favorite audition, then hit the comments with your thoughts. Oh, and please come back to TVLine all season long for wall-to-wall Idol coverage — plus a brand-new season of our Web series Reality Check starring yours truly and the incomparable Melinda Doolittle!