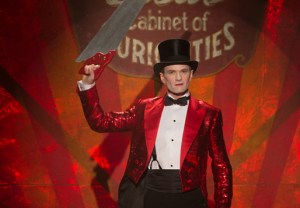 Armed with devilish charm, some leftover Hedwig lipstick and a ventriloquist’s dummy that just happened to be a dead ringer for American Horror Story semi-regular Jamie Brewer, Neil Patrick Harris made his eagerly anticipated debut in this week’s Freak Show.

And, before you could say abracadabra, not only had his magician character, Chester, taken the reins from Elsa (who still thought she was Hollywood-bound), he’d defrocked the Tattler Twins. But wait, there’s gore… er, more.

UNDERHANDED TACTICS | As “Magical Thinking” began, we flashed back two days to Stanley suggesting to Jimmy that he cut off just his left flipper to pay for a good lawyer, lest he meet the same fate behind bars that Meep did. Of course, as soon as the con artist had helped the freak feign illness (so as to get him sprung from prison and transferred to the hospital), he hacked off both of the lobster boy’s hands. When Dell found out from Jimmy what Stanley had done, the strong man blabbed to Elsa, Amazon Eve and Legless Suzi, and in spite of the strong woman’s past altercation with her male counterpart, she offered to help him rescue the now-helpless inmate during his transfer back to prison. (An effort that resulted in the murders of two cops.) Later, as the hour came to a close, Desiree and Maggie revealed to Elsa that Dell had smothered Ma Petite – they even produced the poor thing’s body as proof! – and Fraulein Mars put a bullet through his brain.

DOUBLE YOUR PLEASURE | Both brunette again and committed to one another and the freak show, the Tattlers noticed their fellow performers’ dedication to absolute pleasure and decided that they were past due to lose their virginity. But to whom? Enter handsome chameleon salesman and wannabe magician Chester. The siblings were smitten at first sight; Elsa, not so much. She had little interest in his tricks and even less in his ventriloquist’s dummy, Marjorie (who, if only in Chester’s head, had a mind of her own). What did impress her, however, were the newbie’s math skills. If he’d help with the bookkeeping, he could stick around and warm up the crowd, she said, setting him off sobbing in gratitude.

In no time, Chester had sweet-talked Bette and Dot into being his assistants (not his “victim”) during his sawing-a-lady-in-half illusion. Afterward, the Tattlers, certain that he reciprocated their feelings, threw themselves at him. Though the injured war veteran suffered from flashbacks of himself and Marjorie watching as his wife had sex with her girlfriend – and needed the puppet in order to perform! – he did manage to rise to the occasion and deflower the girls.

THE GREEN-EYED MONSTER | Creepy as all that was, it was just the tip of the iceberg. While Elsa was selling Chester the freak show, Dandy was being informed by his detective that he had a new rival for the twins’ affections – a rival who’d brutally murdered his spouse and her lover (though, in his mind, Marjorie did the deed). Once Dandy recovered from his crying jag, he took swift and decisive action, approaching Chester and telling him that Marjorie had run away because of his tryst with the twins. When he found his dummy, the freak show’s new owner agreed to her demand for top billing. Unfortunately, there was one other thing that she wanted him to do: saw the Tattlers in half.

OK, your turn. What did you think of the episode? Is Marjorie the scariest doll since Annabelle, or what? Hit the comments!