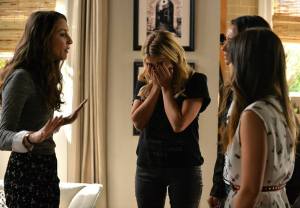 Tuesday’s Pretty Little Liars winter premiere posed an important — though fortunately uncommon — question: What do you do when your best friend is being framed for murder, and you have no proof to the contrary?

If you’re Hanna, you’ll ask Mrs. Grunwald to host a supernatural kiki, which will only lead to more confusion. (Seriously, “No peace, only fear”? Why can’t Mrs. G surprise us by actually making sense for once?)

If you’re Emily, you’ll suggest planting Alison’s hair at the crime scene to frame her, which Spencer will remind you is “an actual crime.” You’ll do it anyway, because you’re desperate, only to discover a conveniently planted camera in the vent in Mona’s living room.

Then, if you’re really lucky, that camera will contain a video of Mona’s actual attack, Alison’s brother will admit he lied about her alibi and the police will haul Ali off in the back of a paddywagon. (Note for future reference: When being arrested, it’s probably a terrible idea to say, “You’ve been warned” while simultaneously attempting to argue your innocence.)

R.I.P.AILY | After weeks of uncertainty, “Paily” fans were finally treated to a really beautiful scene between the two girls, though it might not have happened exactly as they’d hoped. It was a goodbye — or, at least, a “goodbye for now” — as Paige hopped a plane to Atlantic City to escape her hellish existence in Rosewood. “I don’t think she was wrong,” Emily told the girls when they questioned Paige’s decision. “She got out.”

OH, BROTHER | Did you know that, in addition to getting giant arms, lifting weights can also grant you emotions? That’s my theory about Mike Montgomery, who’s showing a surprising amount of depth in the wake of Mona’s murder. I was sure he was going to go the strong, silent route — especially after he brushed off Ezra’s questions during their woodworking sesh — but when he and Aria both broke down in tears at the end of the hour, I knew he loved Mona. (Additional thought: Could Mike become the next male Liar? Surely, he wants answers…)

PLL fans, what’d you think of the winter premiere? Did Alison kill Mona and Bethany? Did Paily’s (latest) breakup scene wreck you? Did everyone on this show get more attractive during the hiatus? Grade the episode below, then drop a comment with your thoughts and theories.