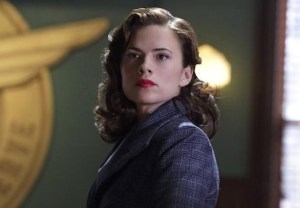 Set in 1946, after World War II has ended (and after the events of Captain America: The First Avenger), Agents of S.H.I.E.L.D.‘s placeholder stars Hayley Atwell as the titular agent, who with all the men now back from the front lines has seen her value to the SSR (Strategic Scientific Reserve) downgraded. Instead, she is dismissed as “Captain America’s ‘liaison'” and tasked to cover phones and pour coffee.

When the SSR learns 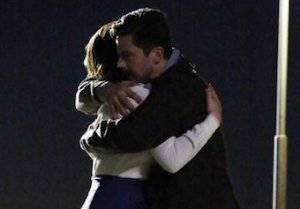 that Howard Stark’s cunning creations are finding their way to enemy arsenals and the black market, they set out to find the fugitive inventor, while Peggy is enlisted by Stark (Captain America‘s Dominic Cooper) to clear his name as she hunts down his “bad babies,” with the help of his mannered manservant Edwin Jarvis (James D’Arcy). “You want a mission that matters?” Stark says to the underappreciated Peggy. “This is it.”

Serving as Peggy’s SSR foils are Chad Michael Murray (One Tree Hill), Shea Whigham (Boardwalk Empire) and Kyle Bornheimer (so many things), while Enver Gjokaj (Dollhouse) plays her one ally, Agent Sousa — a target of derision himself, crippled in the war. Outside of the office, Lyndsy Fonseca (Nikita) plays Angie Martinelli, a waitress pal of “New York Bell Company” employee Peggy.

In the first episode, Peggy — using “ladies’ things” to score a sick day — aims to get a bead on the “molecular nitramene” that’s on the black market, using the fence’s affinity for blondes to get close to and KO him (“Sweet Dreams,” indeed). She hacks his safe to find a vial of the implosive, with her SSR colleagues (and a mystery man known as Green Suit) right on her heels. After neutralizing the nitramene with a homemade solution, Peggy finds her roommate dead, then gets into quite a row with the killer, Green Suit, who vanishes 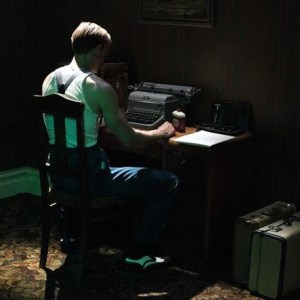 after getting lobbed out a window and later communicates with his superior via a Fringe-like typewriter….

Using Project Rebirth’s Vita-Ray Detector to trace the nitramene cache at a refineyr, Peggy comes face to face with Leet Brannis (TV’s go-to bad guy James Frain), a mysterious gent who, like Green Suit, has a “Y” scar on his throat and speaks through a voice box. After warning that “Leviathan is coming,” Brannis makes off with a milk truck full of nitramene, while Peggy — with a lift from Jarvis — scrambles to flee the imploding factory. Later, we see Jarvis concur over the phone with Stark, “Miss Carter’s an excellent choice. I don’t think she’ll have any suspicions at all.”

As the first hour came to a close, Peggy’s rogue agenda was at risk of being found out, as pap pics from the party she crashed as a buxom blonde landed on her boss’ desk….

In Episode 2, Peggy sought out the missing milk truck, going undercover as a clipboard-wielding health department wonk, while also trying to pinch the (ultimately benign) party photos from Sousa’s desk (in a highly entertaining sequence). She’s also on the hunt for a new place to live (but is reluctant to be Angie’s neighbor, given Colleen’s grim fate). And through much of it all, she is assaulted by a highly demeaning Captain America radio play!

Carter finds the truck’s owner, McFee, at his home, where she also runs into Brannis, who demands “protection” if he is to discuss Leviathan. McFee, though strapped to a chair, flees the premises, triggering a rousing chase sequence that finds Jarvis pumping a shotgun while Peggy fights Green Suit atop the truck full of Nitramene. Peggy, Jarvis and Brannis jump from the vehicle before it shoots off a cliff and into the water, massively imploding. 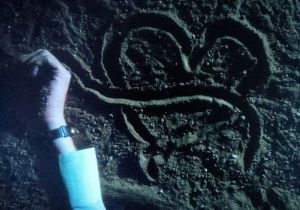 In the aftermath, Brannis is unable to say anything more about Leviathan, his voice box crushed in the crash, but he starts to draw a symbol in the dirt.

After Peggy and Jarvis have left, the SSR team scours the site, finding female footprints and a hotel key, while Agent Krzeminski extracts from the refinery wreckage the license plate from Stark’s car….

Want scoop on Agent Carter, or for any other show? Email insideline@tvline.com and your question may be answered via Matt’s Inside Line. 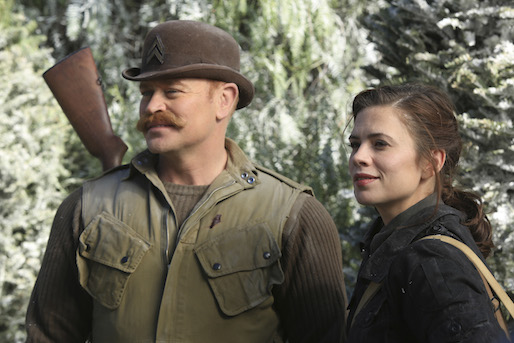