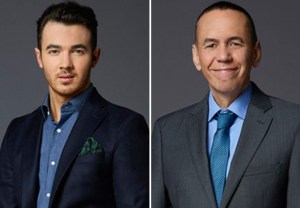 The Celebrity Apprentice‘s latest castoffs may come from two different worlds, but they both agree on one thing: the show’s female competitors are not to be trifled with.

“The women’s team always scares me,” Gilbert Gottfried admits to TVLine. “No matter how angry the men get, it’s no match for how vicious the women are to each other,” to which Kevin Jonas adds, “Brandi [Glanville] really gets in there. The women are going to surprise people this season.”

So, how does each each loser — and I mean that affectionately — feel about their respective strategy?

“I definitely wanted to go in aggressive, and I think I did that,” Jonas says. “I didn’t want people to think they could just walk all over me.”

Gottfried took a slightly different approach — the exact opposite, in fact.

“I really wanted to take everyone aside and tell them, ‘No matter how many pies or frozen dinners you sell, you’re not really going to be hired by Donald Trump,'” he says. “I think these people really started to believe Donald Trump is that stupid that he’d actually hire them.” 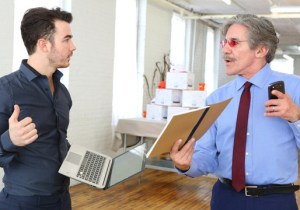 As for Jonas’ on-screen sparring with Geraldo Rivera, he says it was all part of the game.

“I have a lot of respect for Geraldo; his career is extraordinary,” Jonas says. “We both went into this wanting to win. I think he saw me as a threat, so like any good competitor, he went after me.”

At the end of the day, though, neither fired celeb regrets any of the decisions they made along the way — save for Gottfried’s desire for more sleep.

“Had I known how early they were going to let me go, I would have slept in and shown up later,” he says. “And when I got sick of doing all the chores, I would have just said, ‘OK, guys, I’m going to go take a nap now.'”

Do you think Jonas and Gottfried deserved to be fired? Who are you rooting for now? Drop a comment with your thoughts below.