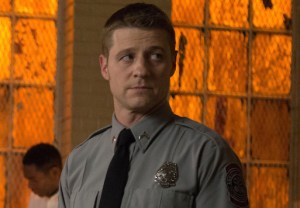 This week on Fox’s Gotham, ‎demoted Jim Gordon found himself investigating a murder within the dreary Arkham Asylum, Penguin’s hubris landed him behind bars and Barbara got dealt a “toxic” blow.

Cutting to the chase: This was not a particularly good episode, all the more disappointing since it heralded the start of the back half of the season. I was, frankly, bored.

In the weeks since I first screened “Rogues’ Gallery,” I’ve mulled why this fell so short, rivaling “Selina” (aka the one with the ‘nappers of kids) as the most lackluster episode to date. And what keeps jumping to the fore is the fact that in a post-American Horror Story: Asylum world, you simply can’t make your mental patients generic. You need to assign specificity to a large swath of them, but as the episode’s montage — in which Jim grilled patient after patient — made clear, this was a random gaggle of generically unwell people, all twitches, googly eyes and jibberish. This asylum, as nondescript as its denizens, devoid of distinct design, deserves a better class of kook and decorator.

That the perpetrator of the rudimentary electroshock treatments was almost immediately identifiable — you don’t cast Christopher Heyerdahl just for background color — made the mystery all the more tedious to wait out. Let’s hope that puppetmaster Gruber pops back up like a bad penny; one can never have too much Heyerdahl.

The asylum story paved the way for Morena Baccarin’s introduction as Dr. Leslie Thompkins, but was anyone else a bit excited by the fleeting tease that she was a loon in sheep’s clothing? The larger trick with the Thompkins character is that what made her special in DC comics lore was her maternal role to young master Bruce. And since Gotham brass have said they’re not taking that path anytime soon, we need other cause to connect with her as an “island,” and the prospect of her eventually “getting a room” with Jim won’t suffice.

Rounding out the episode were the latest rounds of “Which goon can trust whom?” as Fish tested Butch and Penguin rubbed Maroni the wrong way. Meanwhile, Selina stowed sickly Ivy away in Jim’s apartment, to no great dramatic end other than the awkward phone call from Barbara, who had been jilted by lady love Montoya.

Here’s hoping that Jim gets his old job — and his partner Bullock, who still crackles in even the tiniest capacity — back soon, or that the show finds a way to make the Arkham arc unarguably, independently compelling.

What did you think of “Rogues’ Gallery”?