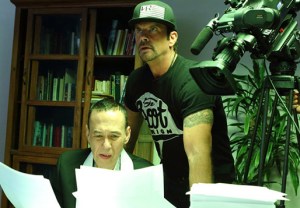 Another two bite the dust!

The Celebrity Apprentice settled into its regular time slot Monday (8/7c), bidding a harsh farewell to a pair of beloved(ish) celebs.

In the first hour, Teams Vortex and Infinity were charged with producing commercials for Neat, a de-cluttering software company — which couldn’t have been more ironic, considering how quickly the competition became a total mess.

But let’s start with the good: The ladies, with Kate Gosselin as their fearless project manager, churned out a solid-if-slightly-limited ad, netting $40K for Gosselin’s charity, Camp Barnabas. (Side note: Is anyone else disappointed that Gosselin’s dig at Brandi Glanville didn’t result in all-out boardroom cat fight? I’m getting impatient over here!)

The guys? Not so successful. Despite the brilliance of Gilbert Gottfried‘s performance in the commercial, the Neat executives believed Vortex’s ad fell short — and the constant bickering between Geraldo Rivera and project manager Kevin Jonas was no help. (Yeah, those two. Again.)

With a mustachioed Vivica A. Fox leading the ladies — and not accepting Shawn Johnson’s “moon cycle” excuses — Team Infinity easily, though not effortlessly, won the competition. (My only complaint: I would have loved to see Jamie Anderson and Kenya Moore come to fisticuffs. Maybe next time.)

Meanwhile, all of the guys on Team Vortex did a wonderful job — and by “all of the guys,” I mean everyone but Gottfried. Unless, of course, the Luvo executives wanted Iago from Aladdin to squawk at them about getting laid. No surprise here…

So, Apprentice fans: Did Kevin Jonas and Gilbert Gottfried deserve the boot? Drop a comment below with your thoughts on their eliminations. Plus, who are you rooting for now?