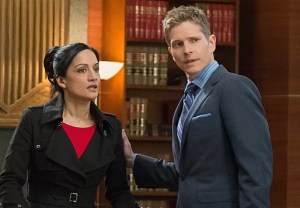 This week on CBS’ The Good Wife, as Alicia engaged in some bad, good and great debates, Diane and Kalinda scrambled one last time to save Cary’s bacon, before he is sent off to prison.

THE NOT-SO-GREAT DEBATE | With the State’s Attorney debate imminent, Eli thrust Alicia into a series of mock showdowns, though finding a Prady proxy proves an exercise. First up was a college prof (played by Chris Elliot) who is serviceable, especially given that Alicia was highly distracted by phone calls to and from Diane & Co. as they pursued a final “Hail Mary” to save Cary.

When the professor was discovered to be high on “medical” marijuana, Eli called in Finn to face off against Alicia, and the sparks certainly were flying as the candidate raised her game. Alas, their verbal intercourse was tempered by a visiting Peter and his one-too-many tips for Alicia’s fauxpponent. Finn thus bailed, leaving the governor/former SA himself to step in and go toe-to-toe with his wife — a prospect rendered pricklier when, just before they got into it, Peter waved off Alicia’s request that he call in a favor and guarantee minimum security placement for Cary.

Sufficiently roused, Alicia parried with Peter like a pro, waging arguments against past SAs and their “controversial” antics that carried subtext on top of subtext. In fact, Alicia had Peter so up against the ropes that Eli had to interrupt and pull his guy from the ring, much to Jonathan’s protest. Eli contended that they needed to think long-term, prioritizing the Florrick marriage, but Jonathan wasn’t buying it. He even ordered Eli off “his” campaign, though it obviously was not his place to do so.

HOW TO SUCCEED IN PRISON WHILE REALLY TRYING | The true drama, meanwhile, swirled around Cary, who as the hour opened was introduced to Bill (Breakout Kings‘ Domenick Lombardozzi), a consultant who would teach him how to get by behind bars. Step 1: Find a white friend on the inside. When Cary tasks Kalinda with that, she goes to Bishop, who in trade for a favor — her taking a call from an associate of his in the near future — puts her on the phone with a man who, in the course of discussing Cary, lets slip that Bishop’s crew already had their heroin shipment on hand in Chicago at the time of the incriminating tap. Yet Cary was charged with advising them on how to import the drugs. Hmmm.

This offers the slim hope for proving a Brady violation, that the police knew they were charging Cary with a (slightly) incorrect crime. Kalinda learns that an Ontario cop had emailed the Chicago PD about the heroin shipment having arrived in Chicago, but her hacker pal Howell finds that Detective Prima never actually read the tip, that it went straight to his Spam folder. Kalinda coaxes Howell into” hypothetically” showing her how to hack the PD server and tweak the meta data to show the email as read.

Meanwhile, Bill coaches Cary on how not to square off with an inmate, how to keep glass from getting slipped into his gruel, and how not to put his faith in a girlfriend. Instead, Bill has one and only one use for Kalinda: to “screw [Cary’s] brains out,” leaving him with a “good memory” to take inside with him. Kalinda shows up at the hotel room, in part to answer Cary’s questions about the “Hail Mary” play he accidentally caught wind of, but also, ultimately, to do as Bill suggested. In the (first) afterglow, Kalinda assures Cary that she will wait for him, that she won’t disappear on him.

HAIL CARY PLAY | Back at the firm and with the clock ticking, Carey points out to Kalinda something fishy about the tap transcript, that there must have been a second detective in attendance. Kalinda seeks out Detective Rodriguez, who had been taken off the case when he refused to play ball. And at the 11th hour (actually, the 13th, given that someone delayed Judge Cuesta with a phony Supreme Court overture…), Diane presents the court with proof of the Brady violation — though what she errantly grabbed off Kalinda’s computer was the (hacked) meta data suggesting that the Toronto email had been read/ignored. Prima rightfully protests, but luckily ASA Pine interrupts to announce that Rodriguez had come forth to reveal the police’s entrapment of Cary. Cuesta then the words we’ve been wanting to hear all season long — that Cary’s case has been dismissed, with prejudice.

Cary’s face reveals all upon the pronouncement, so much weight taken off his shoulders, a dire fate miraculously averted. Diane meanwhile phones Alicia with the good news, and after a day filled with so much intense debating, all Cary’s partner can do is cheer loudly in a parking garage.

Alicia is not alone there, however, and when Jonathan asks her how she’s doing, she smiles broadly, marches up to him and lays a big ol’ kiss on the campaign guru — and then struts away, leaving him at the very least confused.

What did you think of The Good Wife‘s winter premiere?