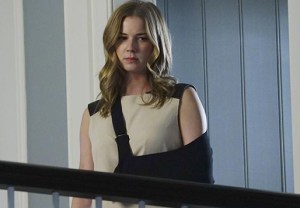 Unsurprisingly, Sunday’s Revenge did not put the “fun” in funeral.

After weeks of lying dead on the floor of his former home, the flawed-yet-flawless Daniel Grayson was finally laid to rest in the winter premiere, making him the only person who did any resting this week.

In a nutshell: Emily took the blame for Daniel’s death (self-defense?), Ben reminded us all he’s the worst by sharing Margaux’s pregnancy with Emily and David revealed his plans to off Victoria: “If all this hadn’t happened,” he told Emily, “We’d be at her funeral right now instead of Daniels.”

But this week’s biggest move was made by none other than Malcolm Black, who managed to shank someone (R.I.P., Chief Alvarez!) within his first two minutes on screen. Welcome to the Hamptons, Malcolm. I’m already terrified of you…

(Side note: When Malcolm introduced himself to the captain, was anyone else expecting him to say “I’m Malcolm Black… bitch”? No? Just me? Well, OK then.)

MARGAUX’S MISSION | To say that Margaux wants to see Emily pay for (allegedly) killing Daniel would be an understatement. In fact, I’ll just let the French firecracker speak for herself: “I know you’re lying. You played a game with the police, with Victoria and with who-knows-how-many others. But believe me when I tell you, I do not play. I know you murdered Daniel. … I’m going to make it my life’s journey to see you pay for what you’ve done, and that journey begins now.” (Oh, Margaux, you clearly don’t realize who the star of this show is.)

LITTLE JACK MOURNER | While most of our favorite/most tolerable Hamptonites were focused on Daniel’s death this week, Jack found himself riddled with guilt over the death of Kate Taylor — more specifically, over the fact that he pumped her chest full of bullets. And with Malcolm Black now in the Hamptons, it won’t be long before he’ll get to apologize to him in person. That ought to take care of it, right? A simply “Sorry for killing your little girl”? Oh, Jack, how nice you’ll look lying in the ground next to Daniel…

THE SPY WHO PAID RENT | Best. Houseguest. Ever. As a sign of her budding friendship with Nolan, Louise is spending a few weeks at Chez Ross — and the results are already spectacular. From her pill-induced baking (see the quote below) to her really amateur attempt at spying (she’d do anything for Victoria), I can tell we’re in for a wonderful couple of weeks. Oh, and speaking of Louise and Victoria, I kind of love how Louise is so desperate for Victoria to include her in her life that she’d even use her son’s death as a bonding excuse. Battle on, Crazy Pants!

And now, for the finest quotes of the winter premiere:

* “I think I’ll bake something for her before my Xanax wears off.” — Louise, who can cook for me any day of the week.

* “My cause is that you’re a sketchy son of a bitch.” — Chief Alvarez, who’s just the worst. (Sorry for stripping you of your title, Ben!)

* “You are one badass travel agent, Mr. Clarke.” — Nolan, who’s always good for a zinger.

OK, Revenge fans, let’s hear your thoughts on the winter premiere: Is Malcolm as terrifying as you imagined he’d be? Are you worried about poor li’l Jack? And which part of the Daniel-mourning process devastated you the most? Drop a comment with your thoughts below.