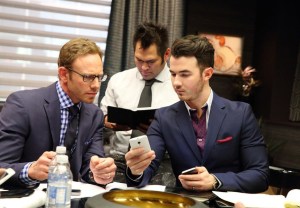 Celebrity Apprentice returned for Round 7 on Sunday, bringing with it 16 new celebs, a couple new feuds and those two magical words we’ve all waited eight long months to hear: “Yah fiyahd!”

Donald Trump‘s first challenge for his contestants was to run pop-up bakeries for Pie Face — and as much as we all love a good dessert, let’s just skip to what we all came here to discuss: the fights.

Let’s begin with the guys (aka Team Vortex), who cooked up a surprising amount of drama — in addition to countless batches of gross/burnt pies. Seriously, who’d have expected Kevin Jonas, the second-least confrontational of all the Jonas Brothers, to ignite the first real feud of the new season? He had a lot to say about Geraldo Rivera’s lack of management skills (“that’s not how you motivate”), but wisely strayed from any cheap shots about the legendary newsman’s famed mustache. Also, I lost count of the number of times Rivera likened this week’s challenge to his experience covering war-torn nations worldwide.

Surprisingly, the ladies of Team Infinity — whose name was Kenya Moore’s idea, as I’m sure she’ll remind us all damn season — got along considerably well; even Moore and fellow Real Housewives star Brandi Glanville kept their sniping to a minimum. The only real pre-boardroom conflict came during confessionals, mostly Moore taking shots at former Cosby kid — and current project manager — Keshia Knight Pulliam. (Wait, a reality show where people say how they really feel behind each other’s back? Say it ain’t so.)

Things took a nasty turn, as they tend to, in the boardroom — especially when the women were asked who was responsible for their team’s epic loss. Vivica A. Fox broke down in tears as Moore pointed her evil little finger at Pulliam, who struggled to defend herself.

Ultimately, though, her defense wasn’t strong enough; Pulliam was the first to receive a pink slip this season.

Stray observations/questions from the premiere:

* How awkward was that whole conversation about why Keshia Knight Pulliam didn’t call Bill Cosby for a donation? (“I know he has deep pockets.” Um…)

* Kate Gosselin wasn’t nearly as outrageous as I — and I presume the producers — hoped she would be. Not only was she helpful, but she appeared extremely likable, avoiding any direct conflict. Has she turned over a new leaf, or is this just part of her strategy? Either way, I’m liking Kate 2.0.

* Does Ian Zeiring know that the Sharknado movies are just… movies? He seems pretty convinced of his shark-slayer status.

* Can we discuss this shot of Brandi Glanville, Kenya Moore and Andy Cohen? How much NBC/Bravo/Universal synergy can one Celebrity Apprentice episode handle?

* How much (more) do you love Gilbert Gottfried now?

OK, your turn to weigh in: Was Trump right to fire Pulliam first? Which celeb(s) are you rooting for this season? Drop a comment with your thoughts below.