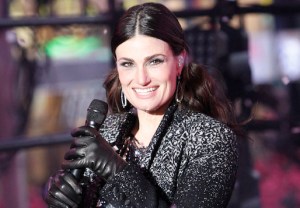 Idina Menzel’s message to those who took issue with her live performance during Dick Clark’s Primetime New Year’s Rockin’ Eve with Ryan Seacrest: Let it go.

Thanks to the highly critical nature of the Internet, Menzel’s performance of the aforementioned Frozen anthem brought out the armchair Idol judges, seeing as she missed some notes whilst belting the tune — live, outdoors in 30-degree Times Square, versus lip-synching to a flawless track (as most anyone else would do).

In response to the negative nellies, Menzel posted to Twitter a copy of an interview she recently gave Southwest Magazine:
https://twitter.com/idinamenzel/status/550820768326877185

Defining success for the magazine, the Tony Award winner said, “There are about  3 million notes in a two-and-a-half-hour musical; being a perfectionist, it took me a long time  to realize that if I’m hitting 75 percent of them,  I’m succeeding. Performing isn’t only about  the acrobatics and the high notes: It’s staying in the moment, connecting with the audience  in an authentic way, and making yourself  real to them through the music.”

“I am more than the notes I hit, and that’s how I try to approach my life. You can’t get it all right all the time, but  you can try your best. If you’ve done that, all  that’s left is to accept your shortcomings and have  the courage to try to overcome them.”

What did you think of Menzel’s live New Year’s Eve performance?
http://youtu.be/c5p700TwuEA