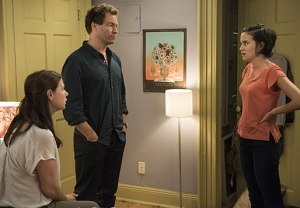 You know how they say the truth will set you free? Yeah, that has not proven to be true for The Affair‘s biggest sinners.

In fact, on Sunday’s season finale of the Showtime drama, the truth only caused problems — lots of them.

Before we get your thoughts on the episode, let’s review what went down in the season’s arresting final hour:

NOAH | For most of The Affair‘s freshman season, it’s been hard to know whether Noah deserves our sympathy. He’s cheating on his wife, so, no… but he’s also berated by his father-in-law, challenged at pretty much every moment by his children and weighed down by a struggling career. And at the top of Sunday’s hour, it’s really hard to feel bad for him, considering his recent separation from Helen —four months ago, to be exact — has allowed for a lot of random sex. In the bedroom, in the classroom…

But Noah’s desktop rendezvous with a fellow teacher is where his luck essentially runs out. He’s slapped with a disorderly conduct charge for the in-school sex (no thanks to the janitor who spied him), and he heads to the Department of Education’s grown-up detention, where he makes some real progress on his book. The novel turns out “extraordinary,” according to Harry, who’d like to publish it and offer Noah a seriously enticing sum. (Half a million dollars!)

Unfortunately, Noah’s rich-guy fantasies are eclipsed by his separation from Helen, who tells Noah that her mother has had a private investigator tailing him for months — to make the divorce proceedings even harsher, of course! Helen knows about her husband’s, er, active sex life now, as well as the abortion clinic freakout he aimed at Scotty a few months back. After all of this, Helen still misses Noah and wants him home — so they cry and then have steamy sex, naturally.

Their (brief) reconciliation comes to a screeching halt, though, when Whitney flees to the Lockharts’ ranch after learning that her parents plan to press statutory rape charges against Scotty. Noah and Helen head to Montauk to handle the situation, but it all goes to hell in a handbasket: Alison’s there (and making eyes at Noah), Cherry’s there (and asking for everyone to forgive each other) and, worst of all, Scotty’s there (and making a very ill-timed entrance). Planning to literally kill the guy, Noah chases Scotty out of the house and onto the front lawn, where he pins him down, begins to choke him… but stops when Cole appears, gun firmly pointed at Noah’s head. Sooo, yeah, it’s an unlucky day for Noah.

ALISON | That encounter at the ranch goes down a tad differently from Alison’s perspective (as things tend to on this show). Instead of Noah heroically defending his daughter’s honor outside, Mr. Solloway finds himself in hot water with Cole inside the house, as Cole confronts the man who’s been bedding his wife. Cole turns his gun on Noah, Helen and Whitney first, then on Alison, then on himself. It’s not easy, but Alison eventually gets her husband to put down the weapon, after tearfully assuring him that Gabriel would want them to be happy — even after his death.

In fact, Alison’s entire day is highly emotional. Four months after her awkward train-station standoff with Cole and Noah, Alison has also separated from her husband, choosing instead to spend time with her mother (!) and her mom’s boyfriend (!!) at a yoga getaway (!!!). She heads back to Montauk to meet her friend Phoebe — the only one who’s level-headed about Alison’s affair, reminding her the sparks weren’t real — then meets Cole at the house they once shared. Cole awkwardly realizes that Alison came back to the house to sell it, not to patch things up with him, and that’s when their marriage ends once and for all. “I never want to see you again,” Cole spits at her, after Alison asks why he wasn’t watching Gabriel on the day he drowned. (A valid point, but when Cole fires back, “Why didn’t you take him to the f—king hospital?!” her argument understandably peters out.)

THE CRIME | In the present day, things aren’t looking much brighter for Noah and Alison, but we do learn a few key details that have been kept from us throughout the season. For one, the twosome is currently in a relationship and living together (with a daughter, though I suppose we still can’t be sure if it’s Noah’s or Cole’s). Noah’s second book has indeed taken off, and he’s got plans to meet with the actor starring in its film adaptation.

But those big plans are brought to a sudden halt after Noah’s latest chat with Detective Jeffries goes poorly. After Noah gets mouthy with the detective and leaves interrogation in a huff, he encounters Jake, the tow trucker who helped Noah out on the side of the road over the summer. Noah tells Jake that he must lie to the police and tell them he’s never met Noah or seen his car before. He pays the guy $20,000 on the spot to keep him quiet… but unbeknownst to Noah, it’s too late. Jake’s been in cahoots with the cops this entire time, and when he brings Jeffries an audio file of his conversation with Noah, the cops have the go-ahead to arrest Noah. And that’s exactly what they do that evening, just as Noah and Alison prepare for bed. Noah’s taken away in cuffs, and although Alison promises, “I’ll get you out of this,” Noah doesn’t seem entirely convinced.

OK, your turn. What did you think of The Affair‘s season finale? Grade the episode in our poll below, then hit the comments to back up your choice.