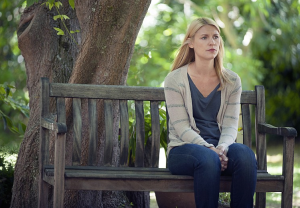 After a string of intense, breakneck episodes, Homeland closed out its fourth season Sunday on a comparatively muted note.

Of course, that’s not to say stuff didn’t happen.

By the end of the hour, Carrie buried her dad, came face-to-face with her estranged mother, went to first base with Quinn and, most notably, found out why Dar Adal was suddenly carpooling with terrorists.

COMING (BACK) TO AMERICA | The action begins with Carrie, back in the States, preparing to lay to rest her father Frank (played by the late, great James Rebhorn, for whom the episode was dedicated). While sorting through pop’s possessions with sister Maggie, Carrie is surprised to discover Dar — last seen bumming a ride from Haissam Haqqani in Pakistan — on her doorstep. Over the course of their relatively brief chat, two things become clear: Dar has no idea that Carrie is on to him (I incorrectly thought he had locked eyes with her from the backseat of Haqqani’s vehicle), and Quinn — who Dar is looking for — remains MIA.

REUNITED AND IT FEELS SO… ABOUT DAMN TIME | At her dad’s memorial service, Carrie — fresh off her moving eulogy — spots Quinn waiting for her outside the church. (The utter relief and pure joy on Carrie’s face warmed my ‘shipper heart, oh yes it did.) The two quickly get reacquainted, sorta-agree to put Islamabad behind them and head off to the repass, where Quinn bonds with both Frannie and Maggie — the latter of who can barely contain her lust. (I imagine the married mother’s inner dialogue went something like this: “If you don’t want him sis, I’ll take him!”) Later, Carrie escorts Quinn to his car, and the two finally stop being polite and start getting really into each other’s mouths. Carrie’s Brody-fueld PTSD kicks in and she pulls away. “Quinn, I’ll just f–k it up,” she warns him. “I know how this goes. It ends badly.” But Quinn isn’t buying what she’s selling. He proposes they both ditch the spy game and channel their inner Ozzie and Harriet. Carrie, clearly tempted, agrees to sleep on it. (Show of hands: How many of you feared Quinn’s pickup truck would explode into a ball of flames as it pulled away from the house?)

JUST WHEN I THOUGHT I WAS OUT… | Back at his apartment, Quinn is greeted by one of his special ops cronies, who informs him that there’s a new operation taking shape in the very near future. As in tomorrow. Quinn wants no part of it though. He’s done with that life. He wants the fairytale with Carrie. But the question remains — does she want the fairytale with him? Faster than you can say stalker alert, he phones his beloved and presses her for an answer. She asks for more time, which he interprets as a full-on rejection. And — just like that — the romance appears to be over before it began. Cut to a nondescript airport hangar, and we see Quinn preparing to take off for parts unknown. (Damn you and your commitment issues, Carrie. Damn you.)

FILET OF SAUL | Despite being tormented by recent events, Saul informs his beleaguered wife that he “wants back in” to make right all that he made wrong. There’s just one problem: Once the propaganda video he co-starred in with Haqqani is made public, Saul will have a hard time getting a job at the CIA gift shop, let alone succeed Lockhart as director. Enter Dar, who summons Saul to the local greasy spoon and proceeds to come clean about his unholy alliance with Haqqani. In a nutshell, Dar agreed to take the terror mastermind off the U.S.’ Kill List under the condition that he refrain from harboring terrorists in Afghanistan. And as a gesture of good faith, the evildoer gifted Dar with the only copy of a certain hotly-anticipated video. Saul is disgusted. “It’s wrong,” he fumes, “just plain wrong.” Counters Dar: “Not every choice we make is blessed with moral clarity – especially in our business.” True dat, reads Saul’s face. With the propaganda video now a non-issue, there’s nothing standing in Saul’s path to director — except Saul himself. Dar urges him to come back “and lead us.” (My brother totally called this, BTW. Way to go, Dave!)

MOM’S THE WORD | Carrie returns from a jaunt in the park with Frannie to find a surprise waiting for her in the driveway: an SUV with Missouri plates belonging to her estranged mother (Broadway vet Victoria Clark). The deadbeat matriarch saw the obituary for Frank and decided to pay her kids a visit. Carrie, not surprisingly, is in no mood for a family reunion. “You have a lot of nerve,” she roars. “You haven’t been here for 15 years. You don’t get to play grieving wife all of a sudden!” Carrie orders her mother to leave (she wouldn’t even let her mom sneak a peek at Frannie!), and she reluctantly complies. Carrie eventually simmers down now and decides to take an impromptu road trip to Missouri to hash things out with mom. But, upon reaching her destination, the first person she encounters is not her mother, but her 15-year-old half-brother Tim! Turns out, her mom vanished all those years ago because she was pregnant with another man’s baby. “You left your children to go have more children?” a stupefied Carrie (rightly) dings her. Her mom explains that she was tired of hurting those that she loved — namely Carrie’s dad, who had apparently put up with her serial cheating for years — and vanished so that she could “do one right thing… focus on Tim.” That triggers quite the a-ha moment in Carrie, who assumed it was her dad’s fragile mental state that drove her mother away. “I always thought that being bipolar meant that you could’t be with people,” she cries. “At least not for the long haul.” Translation: There’s hope for her and Quinn!

LOVE, ACTUALLY | Armed with this new information, Carrie calls Quinn presumably to inform him that she’s in on the whole white-picket-fence thing, only to discover that his phone has been disconnected. She (correctly) deduces that Dar sent him off on one of his signature open-ended missions, and promptly shows up at his house to confront him. She threatens to blab to the press that she saw him rubbing elbows with Haqqani if he doesn’t put her in touch with Quinn. He, in turn, urges her to check with Saul before doing anything rash — and, as luck would have it, she can do so right now because he’s chilling out on the back porch. Upon making visual confirmation of this, Carrie puts the pieces together in her head. Heartbroken, hurt and defeated, she storms off. Cue Homeland‘s haunting jazz score. Bring on Season 5.

What did you think of the finale — and the season as a whole? Predictions for Season 5? Hit the comments!