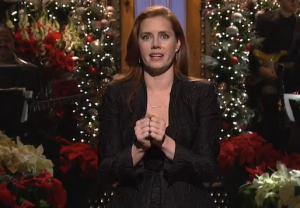 The ingredients for Saturday Night Live’s Christmas-themed episode – hosted by five-time Oscar nominee Amy Adams, with squeal-inducing musical guests One Direction and sketch-rich fodder from this week’s Sony Pictures/North Korea hacking scandal – had visions of guffaws dancing in our heads.

Though an all-over-the-place opening monologue — highlighted by a welcome cameo from SNL alum Kristin Wiig (“Isn’t this the second time you’ve crashed my monologue?” asked Adams) and a cast sing-along of “We Need a Little Christmas” – wasn’t exactly memorable, the show’s strongest moments managed to create just enough holiday cheer to make it worthwhile.

Here are my picks for best and worst sketches of the night:

Best: Cold Open Featuring Dr. Evil
Shrieks of joy engulfed Studio 8H as “A Very Somber Christmas With Sam Smith” was pre-empted by none other than Dr. Evil (welcome back, Mike Myers!), who wasted no time in skewering North Korea (“You’re one of the most evil countries in the world, and your act of war is to kill a movie?”) and Sony Pictures (“they haven’t had a hit since The Walkman”) while tossing in a few inevitable Austin Powers classics (“what are you gonna do next … ask for one million dollars?”).

Best: “Serial’ The Christmas Surprise
Ready for a little Christmas magic? Sure, this top-notch pre-taped parody investigating mysterious Christmas gift-giver ‘Chris’ (or was it Kris?) was perhaps overly long and slightly repetitive at times, but its best (and funniest) moments were in the wealth of subtle details (and of course the brilliant Cecily Strong as Sarah Koenig). Grainy, archival footage, brilliantly odd courtroom sketches, and assorted delightful sound-bites abounded, so rewind and repeat — because this is SNL parody at its very best.

Best: Kim Jong-un on “Weekend Update”
It was all-too-brief, but Bobby Moynihan’s expected reprise of the North Korean leader was a welcome sight, delivering some biting humor (“I’m not afraid OK, I got this”) highlighted by that ever-expanding barrage of red laser sights dotting his chest. With just enough time to hit the exit, the suddenly spooked Moynihan’s offered those sharpshooters this little reminder: “Whoa, whoa, whoa … I’m Seth Rogen everybody!”

Worst: Girlfriends Talk Show
Once again, there may have been worse sketches tonight, but let’s play up the disappointment factor; shouldn’t a walk-on cameo from all five One Direction boys amount to more than some very loud in-studio screaming and an all-too random sketch-ending dance party?

What did you think of this week’s SNL? How would you rate Adams as a host? What was your favorite sketch? Take our poll below, then sound off in the comments!