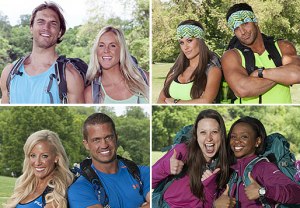 The Amazing Race‘s 25th season reached its final pit stop on Friday, with four teams — instead of the usual three — competing for the $1 million prize. But which team was first to arrive at the winner’s circle?

Before a champ could be determined, the remaining four pairs — surfers Adam and Bethany; wrestlers Brooke and Robbie; dentists Misti and Jim; scientists Maya and Amy — headed back to U.S. soil after their stint in the Philippines.

Let’s hit the highlights of the final leg:

* Upon realizing that Maya and Amy were not, in fact, eliminated, Brooke and Robbie make the scientists feel real guilty about remaining in the race. “We didn’t make the rules, though,” Maya insists. “No, but we’re still allowed to be upset about it,” Brooke shoots back. O-kay.

* Speaking of Brooke and Robbie, they’re the first team to get eliminated after a number of wrong turns bring them to the road block last. But don’t worry: Despite their frustration at losing the race, they still find time to remind us — for the zillionth time — that they’re wrestlers.

* The remaining three teams are neck and neck (and neck) for the final challenge, which requires locating nine shipping containers marked with the names of cities they traveled to on the race. Memorize the numbers on those containers, write them down in the correct order and hand ’em to the supervisor. Easy! (Kinda!)

* Despite how close the teams are during this last leg, only one can come out on top. And that team is… Maya and Amy! From worst to first, indeed. (Misti and Jim nab second place, with Adam and Bethany bringing up the rear.)

Were you happy with the winner of The Amazing Race? Or, considering Maya and Amy should have gone home last week, were the results unfair? Cast your vote in the poll below, then hit the comments with your thoughts on the finale.