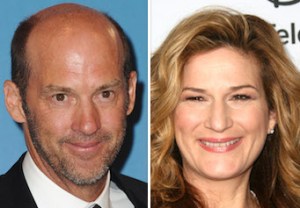 Prepare to meet the people who gave life to Girls‘ Shoshanna.

Ana Gasteyer (Suburgatory) and Anthony Edwards (ER) will guest-star on the HBO series as the mother and father of Zosia Mamet’s character, Variety reports.

* Comedienne Sarah Silverman will star in a half-hour comedy pilot for HBO, our sister site Deadline reports. Written by Secret Diary of a Call Girl creator Lucy Prebble, the untitled project is a comic look at a pathologically honest woman having a mid-life crisis.

* Arrow alum Manu Bennett has joined the cast of MTV’s new supernatural drama Shannara, based on Terry Brooks’ best-selling novels, according to The Hollywood Reporter. He will play Allanon, a druid who is the last of his kind.

* Hulu has obtained exclusive subscription video on-demand rights to new and upcoming FX and FXX series, including Tyrant, The Strain, Married and You’re The Worst.

* Syfy’s acquired series Dark Matter has cast Melissa O’Neil (Broadway’s Les Miserables), Marc Bendavid (Bitten), Anthony Lemke (White House Down), Alex Mallari Jr. (Robocop), Jodelle Ferland (Twilight), Roger Cross (The Strain) and Zoie Palmer (Lost Girl). Based on the graphic novel of the same name, Dark Matter revolves around the crew of a spaceship who are awakened from stasis with no memories of who they are or how they got on board.

* TV One has renewed the reality series Hollywood Divas for Season 2.