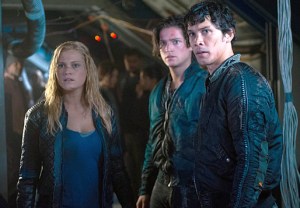 Heads up: Do not continue reading if you haven’t seen the midseason finale of The 100. Major spoilers coming in 3… 2… 1…

Proving their threats are anything but idle, the Grounders called for Finn’s life on Wednesday’s midseason finale of The 100, forcing Clarke to make the most difficult decision thus far.

Knowing death was inevitable, Clarke mercifully snuffed her old flame to avoid further torture from the Grounders, though not everyone — here’s lookin’ at you, Raven — saw the beauty in her plan.

Below, star Eliza Taylor tells TVLine how she really feels about the heartbreaking twist, what it was like to film the actual event and how Finn’s death will impact the survivors moving forward.

TVLINE | Maybe I’m too invested as a viewer, but this episode — especially Finn’s death scene — must have been really tough to film.
It was intense. I think we shot it in the pouring rain from, like, 1 a.m. to 7 a.m. That alone was crazy, but also to be doing something so emotional and epic. I think we had over 200 extras, all dressed in Grounder garb — and poor Thomas [McDonell] was tied to a log that whole time. [Laughs] It was a pretty crazy night. 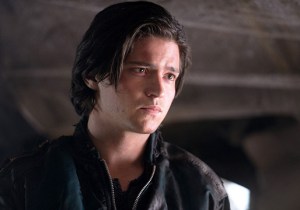 TVLINE | I imagine this is going to have some pretty serious effects on Clarke moving forward.
We’re going to see her break, definitely. What’s good about this, in a way, is that it’ll force her to evolve into a real leader. You’ll be asking, “How far will she really go to save her people?” And, “Can she wash the blood from her hands?” It was really Finn’s story in the first half of the season, and now it’s Clarke’s.

TVLINE | Will some people not understand why Clarke had to do this?
Oh yes, especially Raven. That friendship is over, at least for quite a while. A lot of people are shocked by what she’s done, but people also realize he wouldn’t have made it out alive. He would have suffered, so she ended it quickly.

TVLINE | I’ve got to admit, I’m surprised — and impressed — that the bosses pulled the trigger on this one. Did you think they’d do it?
I was surprised, but I thought it was kind of brilliant. It really gives me, as an actor, a lot more places to go. It’s such a powerful end to Finn’s journey. I was really, really impressed when I read the episode.

TVLINE | You seem very level-headed about everything. How do you predict the fans will react?
I think it’s going to be a mixed bag of emotions. There are going to be a lot of angry people, but hopefully people just think it’s a really cool twist in the story.

OK, fans… react! Were you surprised by Finn’s death? Are any of you happy about it? Whatever your response, drop it in a comment below.