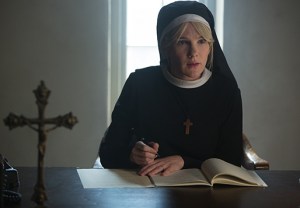 At this rate, Elsa won’t have to share the spotlight for much longer.

In this week’s American Horror Story: Freak Show, not only did another performer take their final bow, but Pepper was delivered to Asylum’s Sister Mary Eunice at Briarcliff Manor.

ANOTHER ONE BITES THE DUST | By the time “Orphans” began, Salty had already died in his sleep (ironically, of natural causes). Elsa claimed to want a proper burial for Pepper’s soul mate, but Stanley insisted that, with the network eager to meet her, she needed to stress less and rest more. He’d take care of it, he assured her. (In other words, he hacked off Salty’s head and sold it to the American Morbidity Museum.)

As Pepper sank deeper and deeper into depression, Elsa regaled Desiree with the story of how, after she founded the freak show and took in the orphaned pinhead, she blossomed, marrying Salty and mothering Ma Petite. Now, of course, both of them were gone. (Sniffle.) Claiming she feared that Pepper would “perish from loneliness and a broken heart if she [didn’t] have someone who loves her,” Elsa brought her to, of all people, Rita (Mare Winningham), the hard-drinking sister who’d dumped her in the orphanage.

THAT WAY MADNESS LIES | Next thing you know, Rita was at Briarcliff, telling Sister Mary Eunice the tallest of tales in order to get her and her husband’s unwanted houseguest committed. First, Rita lied that Pepper had been obsessed with her better half. Then, she claimed that Pepper had murdered their son (when the truth was, since neither of them were happy to be saddled with what they called a “baby Frankenstein,” her spouse had dispatched their offspring).

Horrified by what she thought Pepper had done, Sister Mary Eunice wasn’t exactly a great comfort to her. “Self pity will get you nowhere,” the nun said when she discovered the new arrival banging her head against the wall. But, once she saw tears in the pinhead’s eyes – and mistook her sorrow for remorse – Sister Mary Eunice allowed her to start working in the library. There, Pepper found an issue of Life magazine… with none other than Elsa on the cover! Apparently, she became a big TV star after all?!?

TRUE LIES | Though Dell apologized to Desiree for being such a lousy husband and asked for another chance, she – in the nicest of all possible ways – declined. “We both deserve a shot at happiness, Dell,” she said, “and I could never make you happy… truly happy.” Besides, Desiree was already being made pretty happy by new beau Angus. That is, she was until they went to Maggie for a reading, and – bitter over her break-up with Jimmy – the phony psychic told them that their romance would eventually go to hell in a handbasket.

When Desiree later confronted Maggie, she didn’t just reveal that she was a big faker, she revealed that Stanley was, too. (At least, she stopped short of a full confession and lied that they were fleecing the freak show’s customers, not selling the freaks’ remains.) Beginning to connect the dots, Desiree noted that a whole lot of her fellow performers had perished since Maggie and Stanley showed up. If the three-breasted woman ever found out that the con artists had anything to do with that, “I will kill you dead,” she threatened. (And being killed dead is the worst kind of being killed there is!)

HANDS OFF | After Dot and Bette pleaded with Maggie to take the money that they’d saved up to pay for their separation surgery (which they no longer wanted, anyway) and get Jimmy a lawyer, the grifter decided to put aside her hurt feelings and do the right thing. Unfortunately, before she could, Stanley visited the lobster boy in prison and suggested that he could get Clarence Darrow’s son, no less, to represent him. But how could the accused afford such a high-profile attorney? We learned the (obvious) answer when Maggie dragged Desiree to the American Morbidity Museum – so that, if anything happened to her, someone would know the whole awful truth – and it turned out that its latest acquisition was… Jimmy’s flippers!

OK, your turn. What did you think of the episode? Did the winter finale give you chills or just leave you cold? Hit the comments!