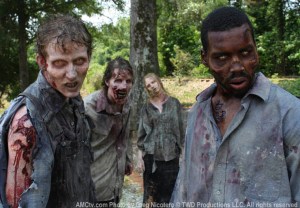 The zombie apocalypse is spreading to the Left Coast!

One of the key unanswered questions surrounding AMC’s in-the-works Walking Dead spinoff — where will it be set? — can now be revealed.

TVLine has learned exclusively that the potential series (the pilot of which will be shot in early 2015) will be based in… Los Angeles.

Yep, the zombies are going Hollywood.

AMC promised that TWD: 2.0 will shed light on a new, previously unseen corner of the zombie apocalypse — perhaps one where the living outnumber the undead. “Almost from the beginning of The Walking Dead (which is set in Atlanta), fans have been curious about what is going on in the zombie apocalypse in other parts of the world,” AMC President Charlie Collier said in September.

It’s unclear if the show will actually be shot in L.A., or another city that could double as the City of Angels (i.e. Vancouver).

As TVLine previously reported, there’s buzz that the offshoot — penned by showrunner Dave Erickson and TWD creator Robert Kirkman — will be a prequel of sorts, one that would chronicle the early days of the epidemic and the effort to contain it.

An AMC rep declined to comment or confirm anything beyond ordering the pilot.