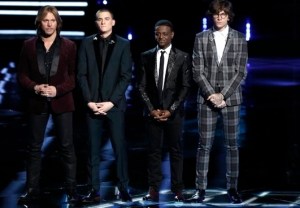 Let me begin this recap with a bold prediction: Season 7 of The Voice, despite being the weakest in the history of NBC’s singing competition, will be the first to launch a chart-topping, stadium-filling superstar.

I will stop short, however, of predicting which contestant gets the job done for the only reality franchise where the slightest hint of negativity is greeted by producers in Hazmat suits, sealed in plastic biohazard bins and shipped to landfills in deepest New Jersey. (I live in the Garden State, so that joke is officially not offensive.)

I mean, let’s face it: At noon today, 7 of the top 11 slots on the iTunes Top 100 singles chart were occupied by members of the Season 7 Top 4 (Chris Jamison, Matt McAndrew, Craig Wayne Boyd and Damien). And if you factor in Pharrell Williams’ commitment to fostering the careers of Top 12 finishers Sugar Joans and DaNica Shirey — both of whom straight kilt/killed it during their respective trio of finale performances — The Voice now has a sextet of powerhouses manning the battering ram that could finally bring down radio resistance to its alumnae’s post-show success. (Then again, if Amanda Brown is not yet a household name, is there anything that makes sense in this messed-up world?)

Before we get to the big news — the Season 7 results — let’s hand out a few awards based on Tuesday night’s grand finale. 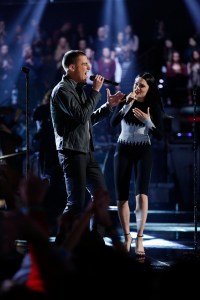 PERFORMANCE OF THE NIGHT: Jessie J and Chris Jamison, “Masterpiece”
You could tell by the way she’d sometimes stop and smile in appreciation, that the British pop sensation was delighted by her duet partner’s breezy soulfulness and superstar swagger — but that didn’t mean she held back one bit on her own beastmaster-level vocals. I loved that this one felt like a true duet — fueled by mutual respect — and without a single bad note in the mix.

MISSING IN ACTION TROPHY: Reagan James, Jessie Pitts and James David Carter
Not sure what #TeamBlake’s trio of contestant did to deserve the cold shoulder, but after the episode’s completely ineffectual Top 20 group rendition of “Pompeii,” these contestants were apparently escorted out of the building by NBC security with a box of Rice-a-Roni and a “thanks for participating!” certificate from Mark Burnett.

MOST UNEXPECTED GROUPING: Craig Wayne Boyd’s “Keep Your Hands to Yourself” Callback Performance
I wouldn’t have expected the country crooner to gravitate toward R&B divas, but dude’s choice of DaNica and Sugar – along with fellow Nashville striver Taylor Brashears — resulted in one of the evening’s most lovely surprises. Am I the only one who prefers him on Southern Rock jams than on twangier fare?

FAVORITE MOMENT THAT HAD ABSOLUTELY NOTHING TO DO WITH THE PROCEEDINGS
Hozier’s “Take Me to Church” is welcome anytime, any place — but how come Mark Burnett & Co. didn’t push to get a couple of early evictees on background-vocal duty?

LEAST FAVORITE MOMENT THAT HAD ABSOLUTELY NOTHING TO DO WITH THE PROCEEDINGS
Ditto for Ed Sheeran’s “Thinking Out Loud” — except unlike Hozier, his new single has no discernible hook! 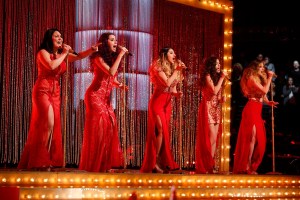 BEST REMINDER OF THE SHOW’S “THIS IS THE VOICE” CATCHPHRASE: “Bang Bang”
Not only did Sugar, Danica, Jean Kelley, Mia Pfirrman and Bryana Salaz look stunning in their slinky red dresses, but they all managed to bring Jessie J-level ferocity to the “OMG, I think I’ve heard this enough” summer-song sensation. Well played, ladies!

PERFORMANCE TOTALLY UPSTAGED BY GOLD ACCESSORIES
Oh how I wish Chris Jamison had covered Lloyd’s delectable “Dedication to My Ex” during the voting rounds — he might’ve pulled off the win had Adam made it Chris’ Live Playoffs jam (instead of that impossible Ed Sheeran rap). Alas, though, the gold-clad backup dancers who weaved in and around Chris’s pals — Ryan Sill, Taylor Phelan, Ricky Manning and Luke Wade — wound up attracting more attention than the hodge-podge of mismatched voices to which they writhed.

PERFORMANCE NOT AT ALL UPSTAGED BY GOLD ACCESSORIES
Ten seconds in to Bruno Mars and Mark Ronson’s “Uptown Funk,” I decided it was best to ignore the R&B powerhouse’s gold-leaf curlers (!) and just allow myself to sink neck-deep in his groove. Best decision I made all night.

LEAST GRACIOUS DUET PARTNER
Matt McAndrew sounded great on Fallout Boy’s “Centuries,” but the band’s failure to welcome (or even look at) the fledgling rock star from his “stage left” prison and truly incorporate him into their performance was a major turn-off. Patrick Stump, this is not how you get reality singing fans to follow you to The Sing-Off later this week on NBC! 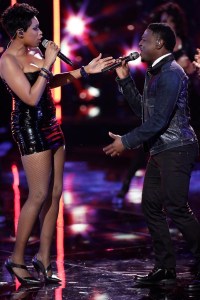 BEST REMINDER THAT WINNING ISN’T EVERYTHING
OK, so last week’s Wild Card recipient Damien couldn’t quite match the intensity of va-va-va-voom Jennifer Hudson on her new single “It’s Your World.” But despite her origins as an American Idol also-ran, J.Hud’s behemoth of a vocal — and her totally rockin’ bod — reminded the Jean Kelleys and Troy Ritchies and Brittany Butlers of the world that other-worldly talent (fueled by hard work) can be unstoppable. Side note: Dear Santa, if I keep going to cardio-kickboxing, can I be J.Hud for Halloween next year?

NICEST VOCAL BLEND: “Go Your Own Way”
It’s no small accomplishment to plunk five solo artists in front of 15 million viewers and say “sound cohesive!” But Matt’s callback performance — in which he was joined by Taylor Phelan, Mia Pfirrman, Sugar Joans and Taylor John Williams — was undeniably smooth and mellifluous. Then again, if there’s a way to make “Go Your Own Way” sound terrible, I’m not aware of it. (Somewhere, there’s a scientific experiment starring Kim Kardashian and Paris Hilton just waiting to be funded.)

OK, time for the actual results… 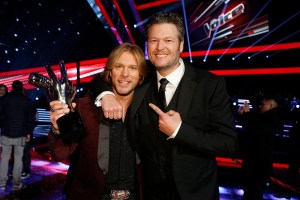 Holy upset, Xtina! Craig didn’t quite have himself the moment-moment that Chris (“Cry Me a River”) or Matt (“Wasted Love”) achieved on Monday — and he only had one of his tunes crack the iTunes Top 10 within the subsequent 12 hours — but his underdog story, his connection to undeniably genuine Blake, his adorable son, his season-long consistency and very appealing makeover — plus a tearjerker final performance of Alabama’s “In Pictures” — proved a lethal combo. Not only that, but pop fans and Adam fans may have split their votes two or even three ways on Monday, while Craig benefitted from being the only Team Blake-ster and the only country artist in the mix.

On that note, I turn it over to you. What did you think of The Voice season finale? Did the right artist win? And who will go on to have the greatest post-show success? Take our poll below, then sound off in the comments! 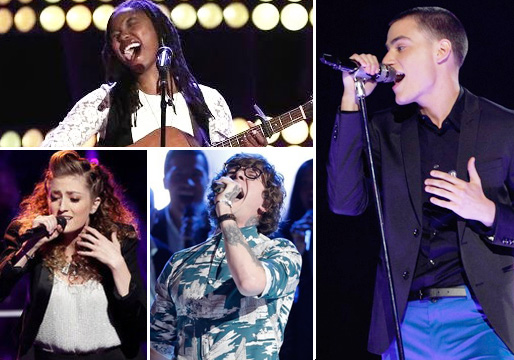