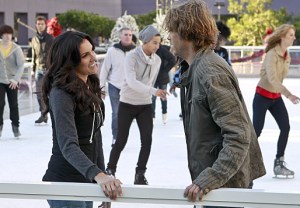 NCIS: Los Angeles‘ Christmas-themed winter finale was teeming with good cheer — in the final moments, at least, and after much anxiety for Callen.

The Case of the Week involved a thumbdrive loaded with stolen super-malware, which the team realizes had been hastily dropped inside a handbag belonging to Callen’s girlfriend Joelle, as the Santa-dressed thief made his escape.

Fearing the baddies might track down and come gunning for Jo, Callen kept a close eye on her. And though Kensi and Deeks were able to subdue one of the killers who eventually came a-knocking, two others stormed Joelle’s home, forcing Callen to break cover (as a mild-mannered, suit-wearing “securities trader”) and spirit her to safety, as he fended off the thugs with gunplay and, ultimately, some hand-to-hand.

Jo was understandably shaken by Callen’s revealed ruse, but by episode’s end she accepted his invite to meet up at the skating rink — though she declined to meet his NCIS “family,” yet. “I want to meet you first,” she said, and starting with his first name. Callen laughed, “That’s a bit complicated….”

Elsewhere: With a “personal yet practical” joint ski trip looming on their holiday itineraries, Kensi pulled Deeks aside at the ice rink to get serious about… something. She observes that separately, they are bold. But together, they tend to be safe. But no, this isn’t some pragmatic kiss-off. Rather, she declares — while taking his hand — “I want to be bold… with you.” “No more games?” Deeks confirms. “Chips on the table?” “All in,” she says, and as they begin to plan out their very immediate future, Deeks pulls Kensi in for a kiss.

Also, Nell broke off her plans to attend a holiday-themed horror movie-thon with Eric, when she was given the opportunity to fly home early. Unless… he wants to come home with her? And as a final tree-topper for the very merry hour, Sam’s wife Michelle finds just the right gift for the former SEAL who has everything — a surprise visit from his recently promoted cadet sergeant son, Aiden.

What was your favorite moment from the episode “Humbug”?