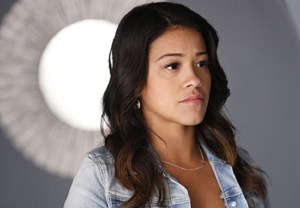 Jane the Virgin‘s Rafael may be one shady Solano.

Meanwhile, Petra makes a surprising play for Jane and Rafael’s baby, a move that ultimately uncovers her traumatic history in the Czech Republic.

RAFAEL: DRUG DEALER? | Michael suspects that Rafael is “shady” and may be tied to — if not actually be — Sin Rostro. However, he’s got no evidence to back up his suspicions. So he enlists his brother Billy, who’s now working at the hotel, to dig around. Billy snatches Rafael’s wallet and finds a key sewn into it. (Weirdest hiding place for a secret key ever, yes? You only flip that wallet open all the time.) Eventually, they discover it belongs to a safe in Raf’s office, which holds money, a burner phone and multiple passports. This is not looking good. Even worse: When Michael obtains a warrant to officially search the safe, the items are missing, and Rafael sure does look smug about it, doesn’t he? On the bright side, Michael and Nadine accidentally discover a secret passageway under the bathtub in the missing Serbian’s room.

NATALIA EXPOSED | Petra shows up at Jane and Rafael’s sonogram and declares that she wants to be a part of the baby’s life. Of course, Jane and Rafael are having none of that, but Petra is a smart cookie who comes prepared: She reminds her soon-to-be ex-husband about the adoption contract they drew up when they considered surrogacy, so by law, she has a claim on Jane’s baby. Rafael wants to pay Petra to get her to back off, but Jane sees throwing money around as nothing more than a Band-Aid. Rafael calls her thinking naive, but decides to go with her plan: She’ll act as an informant for Michael’s investigation and record her conversations with Petra. Her strategy goes awry when the blonde reveals she really does want the child because she lost her father, who died trapped behind the Iron Wall. It seems like a legitimately genuine sentiment — until a quick visit to Wikipedia (I assume) reveals that Petra’s story doesn’t match up with the historical timeline and that she’s been using someone else’s identity. It’s enough to get Petra to give up her plan.

As for Petra’s real story: Milos was her first love back in the Czech Republic, and he did not take their breakup well. In fact, he tried to hurt Petra by spraying a chemical on her, but it landed on her mother instead, who then was hit by a car. Ivan came to her to warn her about Milos and offered to get her out of the country using a different alias. It’s not quite as dramatic or as shocking as I was expecting, but if it means we get accidental hostage Ivan trying to figure out how to break free of his cuffs by watching Rogelio’s soap, I’m all for it.

ROMANTIC COMPLICATIONS | Money isn’t the only thing Jane and Rafael disagree about in the episode. The two also have differing views on education and religion. Jane wants her child to go to Sunday school. Rafael offers a compromise: a private school with a religious bent. Jane is slightly horrified, since public school means more diversity and less chance of becoming an entitled snob. But the way they take down Petra — by going with Jane’s plan, while throwing money at a P.I. — proves “we’re better together,” Rafael declares, and the rest? They’ll figure it out.

ALBA’S TUMBLE | After enjoying the booze at an awards show afterparty, a drunk Alba goes to give Petra a piece of her mind. She overhears Ivan begging for help and encounters Petra’s mother, who sends her down a flight of stairs. ¡Ay no!

Finally, some memorable lines and odds and ends:

* With her sassy spunk and her sacrificing her romantic relationships for Jane’s sake, Xo is turning into quite the lovable mother. I might go so far as to describe her as Lorelai Gilmore-meets-Tami Taylor. She even forgives Jane for describing her as putting “the loose in Lucy” in one of her short stories and submits the consent form for it to be published. “I am not going to be the reason you miss your window,” she tells her daughter.

* “A hug from Rogelio is like a rabbit’s foot: lucky, rare and soft to the touch,” Rogelio says, offering Xo one before her meeting with a record producer.

* How cute is Rafael on his first bus ride ever? I look forward to him learning how to do laundry. No credit-card slot there, so that should be interesting.

Jane the Virgin fans, do you think Rafael is tied to his hotel’s criminal happenings? Did the Petra backstory live up to your expectations? Grade the episode via the poll, then hit the comments with your thoughts!