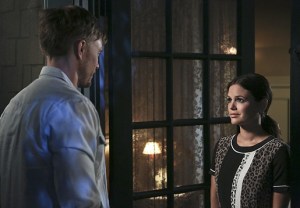 The following contains spoilers for Monday night’s season premiere of Hart of Dixie.

Hart of Dixie‘s Season 4 premiere sneak peek on Monday night brought a handsome new addition to Bluebell, but it’s one that’s still on the way that shocked Zoe.

After hooking up with Wade — though failing to win back his heart, sadly — the doc discovered she was pregnant.

Meanwhile, Lemon returned from her singles cruise with a saintly doctor of her own — but their romance is all a ruse.

Below, executive producer Leila Gerstein previews how Zoe and Wade will deal with their bun in the oven. The EP also reveals when we’ll learn to whom Lemon’s heart belongs and what’s in store for AnnaBeth.

TVLINE | How much did Rachel Bilson’s pregnancy impact the arc for Zoe? Was that something you always wanted to do? Or did you have to speed up the arc?
It’s not like I had a humongous plan for what Season 4 was. When you’ve done 66 episodes, you don’t even have time to think. I knew the endgame, but I didn’t know how we were going to get there… Rachel being pregnant and the decision to write her pregnancy in definitely became the creative choice that fueled what her and Wade’s relationship was. If that character got pregnant, that’s it. That’s going to be the most important thing that’s ever going to happen to her, and her and Wade.

Yes, that really dictated what the season was, but I was so grateful because it really gave us a new way to the story. I like to think I would, but I’m not sure that I could have, come up with something as great. Maybe I would have had her get pregnant later on, but to know that I had to write her pregnancy into the first episode because she was already six months pregnant… We really just had to expedite things. It just makes a very clear story. It was very clear to me the second that I knew she was pregnant, they’re going to have sex, because I’m not going to have her have someone else’s baby.

TVLINE | It’s such a big thing for the characters. How does it change them?
The idea that you’re going to be a parent— as somebody who is a parent —suddenly you’re like, “Oh, my God.” You have to cut through the bullsh-t. You have to grow up. Because from the moment you find out, you have, what, seven-and-a-half months to figure out how to be a grown up and take care of someone else? There’s not going to be time for that, “Will they or won’t they?” They’re going to have to figure it out really fast, because someone else is going to be dependent on them.

TVLINE | In the next episode, Zoe seems to be in the headspace of, “I’m going to do this alone.” Is Wade going to come around and make a go of it in a more committed way?
All of this will be answered in Episode 3. Like, so fast.

TVLINE | Lemon and Henry are pretending to date, but could that turn into a legit romance?
Her heart is not with Henry Dalton. We will know exactly where Lemon’s heart lies by the end of Episode 3.

TVLINE | What’s going on in AnnaBeth’s love life?
AnnaBeth, at the end of Season 3, broke up with Davis Polk because she realized she still has feelings for Lavon. Those feelings have not gone away, and AnnaBeth does not know that Lavon is in love with her best friend. So that is going to lead to some complications in the early part of the year. But this is a big season for AnnaBeth. She’s going to embark on a new career and find new love. Things are looking very good for AnnaBeth.

TVLINE | And what about Cricket, who came out of the closet?
This will be the year where Cricket starts dating her first woman. She’s still kooky, adorable Cricket. She’s exactly the same.