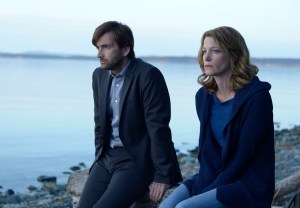 It’s one and done for Gracepoint.

Fox’s just-wrapped mystery drama will not live on beyond its low-rated first season, TVLine has learned.

Although the Broadchurch remake was billed as a limited series, the possibility existed for a second season. But the show — which starred David Tennant and Anna Gunn — never made a dent in the Nielsens. Its October premiere drew a disappointing 4.8 million viewers and a  1.2 demo rating. (Those numbers fell to 4 mil/0.9 for last week’s finale.)

Gracepoint fans can take some comfort in knowing the franchise will live on via the original series; Broadchurch Season 2, which finds Tennant reprising his role as Det. Alec Hardy, bows on BBC America on Feb. 4.