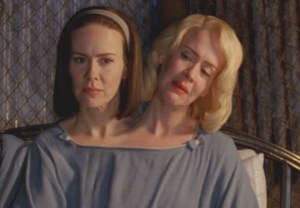 THE PERFORMANCE | Performer of the Week doesn’t seem like a sufficient accolade to bestow upon Sarah Paulson after this latest Freak Show. Maybe, since she blew us away as not one character but two, we should name her Performers of the Week?

First, as the Tattlers argued about whether to undergo the surgery that would separate them — and possibly kill one of them — the actress reminded us of how cold Dot could be about their “infinite, intolerable arranged marriage” and how sweet Bette could be. When the latter revealed that she was willing to go so far as to give up her life in order to secure her sibling’s future happiness, even her twin was moved.

Later, after heading back to the fairground, Dot finally confessed to Jimmy that she was in love with him. “You are the only man for me,” she said, bravely dropping her and Bette’s top, “’cause you’re like us — different but special.”

Throughout the scene, Paulson’s eyes glistened with a hopefulness that was so sincere and intense that eventually it couldn’t be contained — it had to spill out in tears. (Top that, CGI!) And, though Jimmy rejected the Tattlers’ offer to make him the rare man with both a blonde and brunette wife, the sisters’ portrayer left us all in, wholly impressed by the ultimate special effect: her skill.

Nashville‘s third season, Connie Britton has been playing Rayna as a woman doing the smart thing, no matter what. So we’ve seen her bite back a lot of words and swallow a bunch of objections, the mounting realization that Luke was wrong for her evident in the set of Britton’s jaw and the weary look on her face. But in Wednesday’s winter finale, Rayna finally decided that enough was enough, and Britton soared. Our favorite moment: When Rayna drove off, Britton exuding peace in a way she hasn’t been able to all season. We can’t wait to see what either woman will do next.

Conceal, don’t feel? Not a chance. As Once Upon a Time‘s Snow Queen, Elizabeth Mitchell gave Storybrooke the cold shoulder for much or her stint, ultimately casting the Spell of Shattered Sight to bring out the very worst in these mostly good people. But when Ingrid was faced with proof that Gerda, the sister who epically scorned her, ultimately had a change of heart, Mitchell delivered a sweeping, emotional “death bed” performance. “All I wanted was to have my sisters’ love — and now I do,” she gushed, her “happy ending” in hand. Yep, in her final moments, Mitchell’s ice queen thoroughly melted us.