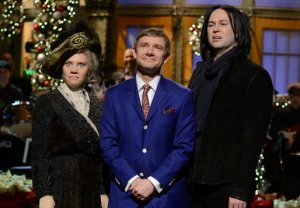 There were lovely gifts and lumps of coal under the tree as Martin Freeman (Fargo, Sherlock, The Hobbit) took the reins of this week’s Saturday Night Live.

The episode started strong — with one of the better cold opens in recent memory (Taran Killam’s Charlie Rose interviewing the psychologists who helped the CIA with their brutal interrogation methods), a weird but occasionally amusing sketch featuring Freeman and Leslie Jones as a mismatched couple getting married after five days of dating (Kate McKinnon is just amazing), and then one of the best pop-culture mashups the show has produced in several years (more on that below).

Things devolved over the course of the installment, however, thanks to a Waterbed Warehouse ad that found Aidy Bryant turning up the volume to no avail, Colin Jost’s stilted cue-card reading during “One Dimensional Female Character from a Male-Driven Comedy” and, alas, the two “weakest links” discussed at the end of this recap.

Below are my picks for the week’s best and worst.

BEST: THE OFFICE: MIDDLE EARTH
Every detail of this pre-taped gem — which welded Freeman’s breakout role on the British The Office and his current stint in The Hobbit — was perfection. Bobby Moynihan was surprisingly perfect as a David Brent/Gandalf — “THOU! SHALL! NOT! PASS!… gas.” — while Killam’s shirtless, raw-fish-gobbling Gollum added just the right level of absurdity to the mix. Who’d have thunk you could save Middle Earth and wind up selling reams of paper and driving a Jetta?

BEST: ST. JOSEPH’S CHRISTMAS MASS SPECTACULAR
All your favorite annual-trip-to-mass archetypes rolled into one very funny pre-taped short. I actually guffawed at the line about Pastor Pat “who sings everything in constantly changing speeds” (well done again, Mr. Moynihan!) and McKinnon’s hapless organist wasn’t far behind. By the time we got to the dueling lectors — “12-year-old Ryan Kelly, who really doesn’t want to be doing this, and 44-year-old Colleen Chapin, who really, really does” — this one was nipping at The Office: Middle Earth‘s heels.

WORST: PINE RIVER LODGE TREE LIGHTING
Kenan Thompson (who also fronted the ho-hum Sumpin’ Claus) mugged his way through this pointless bit about a jazz singer probing his reluctant saxophonist (Freeman in a terrible wig) about a domestic altercation — in the middle of a holiday performance. Killam’s last-minute entrance as the disturbed, boot-stealing “Roman” helped escalate (or should I say drag) this sketch not just to “worst of the night,” but a contender for “worst of the season.”

WORST: HEINZ ASSEMBLY LINE
Freeman was saddled with the unenviable task of playing a manager at a Heinz ketchup plant attempting to teach a clueless newbie (Taran Killam — was he in every single sketch this week?) incapable of understanding basic instructions on how to work an assembly line.

What did you think of Freeman’s SNL episode? What were your favorite and least-favorite sketches? Take our poll below, then sound off in the comments!