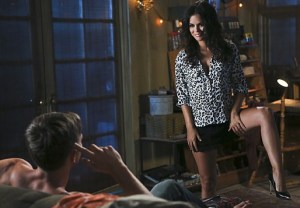 Get ready for the Great Farewell to Bluebell Party of 2015!

No, that doesn’t necessarily mean Hart of Dixie‘s 10-episode fourth season will be its last — The CW has yet to declare a verdict on that front — but regardless of what happens, the town denizens will be getting a proper goodbye. And yet, there’s still hope for more stories.

Creator Leila Gerstein tells TVLine that she plans to give all the characters “a happy, celebratory conclusion” at the end of the upcoming run, “while still leaving some doors open for the future.”

However, “I do feel like 76 episodes of these particular love stories is plenty,” she says.

TVLINE | How did you approach the season with the shorter episode order and not knowing if it was the last one?
Ten episodes gives us a real opportunity to tell a lot of story really fast. It was very liberating after 66 episodes. [Laughs] It’s a really tricky thing when you create a show. Particularly because it’s a romantic comedy, you can’t set up a beginning, middle and an end because you have no idea when the end is, and you don’t even know how to parse it out. It’s kind of crazy, so things just [zigzag]. But we did decide to take all the central love stories and bring them to an end. We actually had been saving a lot of stuff for whatever was the end. So we just decided to burn through it this year.

TVLINE | At the end of the Season 3 finale, Zoe vowed to Wade that she was going to prove that they belong together. What’s her plan?
Of course, Zoe being Zoe, she will begin the episode going about it all the wrong ways. She will first ask him to the movies, which is all low key. Then Wanda and AnnaBeth convince her to make a big romantic gesture, which she will also do to no avail. She will try seduction. And she will try various things in her confused Zoe way.

TVLINE | Without spoiling too much, I was impressed by how much restraint and strength Wade has when she’s coming at him. What’s the issue for him that’s making him hold steady on his stance?
Zoe has burned Wade. Before Zoe, he never put himself on the line for anyone ever. Everything came easy for Wade until he met this woman. And then he put himself out there for her at the end of Season 2, and not only did she stay in New York, she came back with a new guy. She devastated him. Going back in those waters is not something he thinks his heart can take.

TVLINE | Tell me about this new guy, Henry (played by Hawaii Five-0‘s Ian Anthony Dale), whom Lemon brings home.
He is a doctor. He is perfect in every way. He is grandma Breeland’s dream guy.

TVLINE | With this seemingly perfect man in the picture, do Lavon or George have any hope?
Poor Lavon and George. It was already horrible enough when they found out each was the other’s competition. ‘Cause it’s not like Lavon or George are so shabby either. If I was George Tucker, I’d be pretty intimidated by Lavon, and vice versa. They already have a lot of competition and suddenly, this guy shows up and one-ups them in every way. He’s a borderline saint. That makes them completely infuriated and frustrated. So they’re going to have to get over their own grievances with each other to band together and get rid of Dr. Henry Dalton.