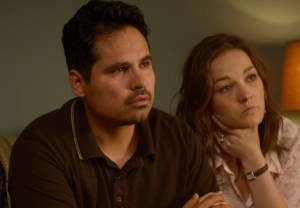 There was never going to be a happy ending to Gracepoint, Fox’s remake of British crime drama Broadchurch.

I mean, when your starting point is the murder of a 12-year-old boy and your midway marker involves the suicide-by-drowning of a falsely accused old man (in possession of a creepy secret, but still…), you can’t expect the closing montage will be set to Jimmy Cliff’s optimistic “I Can See Clearly Now.” (Not unless someone has a coal black sense of humor and a blatant disregard for the audience’s emotional state, anyway.)

But oh, man. The way Episode 10 spirals down, down, down like an eddy in a cold, dark river — dragging kind-eyed Det. Ellie Miller so far below the surface she may never take a true, clear breath again…

In other words, the Gracepoint finale is as brutal as you’d expect — maybe even moreso — making real the awful, overarching specter of pedophilia that lurked in the shadows all season; making true the creepy phone-company clairvoyant’s prediction that Danny Solano’s killer was someone close to him; and making a mess of the audience’s emotions with a final-act twist that doubled down on Ellie’s grief.

In a nutshell, here’s how it plays out: 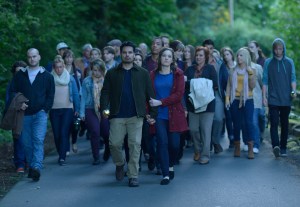 * While Ellie continues her interrogation of Vince — assistant to Danny’s dad/secret hunting buddy of Danny’s — Carver calls in Ellie’s son Tom (and hubby Joe) to find out why the kid smashed his computer hard drive. Turns out BFFs Danny and Tom were feuding, with the former taunting that Tom would soon discover his own dad was “bored by you — you just don’t know it.” Hrmmm… At this point, we all know that somehow, Ellie’s world is about to crumble around her, but before that, we get a brief moment of relief.

* Carver and Ellie share a moment on the shores of Gracepoint, with Carver finally telling his No. 2 that she’s done “good work on the case.” And with that, he sets off to find at what address Danny’s second cellphone had been activated.

* Surprise! The cellphone traces back to Ellie’s home — where Carver finds Joe in the garage, looking guilty as hell. “I’ll tell you everything,” Joe says, almost looking… happy? At the station, he admits he struck up a friendship with Danny when the boy’s father hit him for quitting his soccer team — but he clearly doesn’t see himself as the predator in the equation as they “got to know each other” spending afternoons alone. We see Joe’s version of the night of Danny’s death — and it’s a horrifying seduction scene, one that Danny flees after Joe strokes his lips with his fingers. In the ensuing chaos, Danny falls and strikes his head on a rock — or so Joe wants us, wants himself to believe — and the terrible night ends with him disposing of Danny’s body on the beach.

* Now, it’s Carver’s turn to break the news to Ellie — a moment of devastating drama that (it has to be said) proves Anna Gunn is much more than her Breaking Bad breakout role. She freezes in disbelief, vomits when the realization hits, shivers in the hope that somehow it’s all not true, and finally goes to confront the monster with whom she’s shared a home (and a bed) throughout the investigation. Despite Carver’s warnings, Ellie violently assaults her husband — slapping him repeatedly, hurling him to the ground, kicking at his torso — and like it or not, it’s cathartic to watch.

* Carver breaks news of Joe’s arrest to the Solanos — and their almost numb reaction proves perhaps even more devastating than wailing and gnashing of teeth. (Later, a brief memorial service features some empty platitudes from Rev. Paul and an around-the-lake ring of solidarity bonfires that I guess are meant to give us some closure. They don’t though, really, do they?) 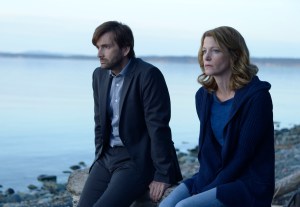 * Finally, at Carver’s instruction, Ellie takes her boys to a nearby hotel to isolate them from the community and the media — and it’s there she has to break the news to Tom. “I’m here with you and I will never leave you. I will always love you and protect you,” she tells her pre-teen son, before having to ask if his father had ever touched him inappropriately. It’s a very true moment, but one that borders on the unbearable. The boy insists vehemently that the answer is no. But something still seems amiss. Finally, maternal instinct takes over — or maybe it’s the detective within her finally freed of her emotional ties to the case — and Ellie asks her cowering son, “What are you not saying?” Turns out Tom followed his dad to that cliffside cabin and watched him make a sexual advance on his friend. As Danny sprinted away — with Joe in pursuit — Tom wielded a boat paddle to defend his friend, but the wild backswing cracked little Danny’s skull and killing him instantly. So while Joe is indeed deeply guilty, the murder is (however accidental) on Tom’s hands, with Joe merely taking care of the cleanup/coverup.

* Ellie visits Joe in jail. “That’s what you meant by ‘I’m a good man’?” she seethes, as Joe’s eyes brighten, thinking maybe he’s getting off on the worst of the charges. “I never touched him,” he swears. “You were going to,” Ellie spits, imploding her husband’s delusions of innocence. When he puts the power in her hands — asks her what she wants him to do — she makes the decision to protect her child and let her husband rot, no matter the psychological consequences. “Every single bit of it stays between us,” Ellie declares, and it’s as close to a happy moment as we get in the hour.

* We also get a nearly silent moment where Ellie stands outside Danny’s house — and Beth comes out to tearfully face her former friend, the wife of the man who killed her child. “How could you not know?” she asks flatly — and it harkens back to the exact question Ellie posed to town pariah Susan Wright about her late husband’s abuse of their little girls. Let’s be honest: We all knew that moment was going to come around and haunt our protagonist, yes?

* Carver, in the end, decides to get the aortic valve surgery he’s been putting off, says goodbye to Ellie (who jokes that they’re now bonded as members of the “former detectives club”) and then takes a video-phone call from his daughter. She wants him to attend her graduation. And she’ll attend his surgery. Looking at his cell, his mind wanders back to his questioning of Joe and Tom. Did Ellie’s son ever see anyone hit Danny? “I never saw anyone else hit Danny” — anyone else? Carver knows something in the boy’s story isn’t right, but after he dials Ellie and she ignores his call, we’re left to wonder whether he pursues it further or walks away with at least some sense of justice found.

Like I said, there was never going to be a happy ending to Gracepoint, so perhaps we should be happy with some twisted justice and a side of moral ambiguity.

On that note, I turn it over to you. What did you think of Gracepoint? Did you like the finale? Did the Joe-Tom twist sit right with you? And did you see any of it coming? Take our poll below, then sound off in the comments!