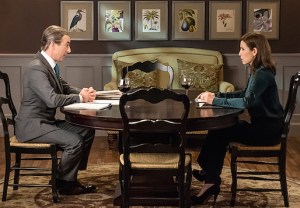 The 2015 Golden Globe nominations were, as per usual, a mixed bag. For every inspired nod (congrats, Gina Rodriguez!) there was one that had be scratching the skin off my scalp (Downton Abbey over Homeland). So without further adieu, I give you the good, the bad and the downright ugly from this year’s list.

I’m Rolling My Eyes About:
* The Globes’ infuriating tradition of lumping every single genre in the supporting acting races. Enough. (Yes, I copied and pasted this directly from last year’s Snappy Js. And I will continue to do so until something changes.)
* Downton Abbey‘s best drama nod. Love the show, but that slot belonged to the resurgent Homeland. Or Hannibal.

I’m Super-Pissed About:
* No love for The Walking Dead. Ditto The Mindy Project. Ditto Hannibal.
* The absence of The Americans‘ Matthew Rhys and Keri Russell in the drama actor and actress categories.
* The omission of Bates Motel‘s Vera Farmiga.
* Carrie Coon from The Leftovers getting left out.
* Masters of Sex (and its leads) getting the shaft.
* Sons of Anarchy‘s criminally underrated Charlie Hunnam getting zilch.
* Scandal‘s Bellamy Young getting bupkis.
* No love for The Big Bang Theory, or its cast.
* Homeland getting snubbed for its comeback season. Also, where the hell is Mandy Patinkin?!
* No Tatiana Maslany?!
* The Dreadful omission of Eva Green.