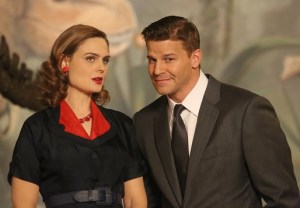 How do you shake things up when your central couple is married and settled in? Send them to the ’50s!

This Thursday, Bones reaches it milestone 200th episode (Fox, 8/7c) with an installment that reimagines Booth and Brennan in a Hitchcockian movie scenario. And as the longtime lovers take on their new personas, “a little cat-and-mouse [game]” is ignited, David Boreanaz, who also helmed the hour, previews.

VIDEOS Bones Trailer Looks Back at Booth and Brennan’s Beginnings

Below, executive producers Hart Hanson and Stephen Nathan, as well as stars Boreanaz and Emily Deschanel, discuss the couple’s new beginning in the unique outing, the special treats in store and the cost — physical and monetary — of pulling off such a feat.

TVLINE | How did you come up with the concept for the 200th episode?
HART HANSON | I want to say one thing before you start. If I was running the show, we would never have done this 200th episode. It’s Stephen’s.

TVLINE | Is that a good thing or bad thing?
HANSON | It’s an excellent thing.
STEPHEN NATHAN | It really is examining Booth and Brennan and the beginnings of their relationship in another situation. Everything is the same. It’s sort of an origin story. It is the start of the science of forensic anthropology in a bizarre and interesting way. It is seeing them meet the first time again and seeing that relationship begin again.

TVLINE | How different is Booth and Brennan’s relationship in this episode?
EMILY DESCHANEL | She plays an LAPD officer who is after a jewel thief. She’s following this jewel thief who is Seeley Booth. She follows him to a house and they discover a dead body. Now everyone’s convinced that Booth has killed this woman and Brennan’s not so sure. So they pair up together to prove his innocence and prove that she is a great [officer] and that she should be promoted to detective. 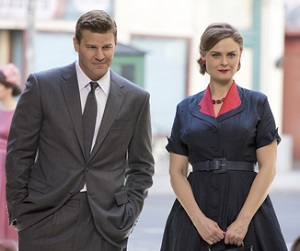 DAVID BOREANAZ | It’s pretty much the same. There’s no real big difference except that I’m a jewel thief and she’s a detective. We really went for the moments to stay alive, which we’ve done every episode with this show… I always go back to the two of us working with Ivana Chubbuck, who’s an amazing acting coach, and she helped us so much with these characters. We brought these great, raw, new, exciting characters to life with the help of her. Obviously, we executed it and gave it to the writers. They were into it. There’s a lot of moments there that I look back on and they were big moments.
HANSON | It’s the fourth time we’ve seen them meet for the first time over 200 episodes.
NATHAN | That’s right. Their jobs might be different, but their characters are the same to a large extent. Some [other characters] I can’t really talk about because I’ll give away the ending. And we did want this to be not just doing a sketch like Saturday Night Live. It’s a mystery. We’re watching basically a Hitchcock mystery.
HANSON | With some gifts for the audience.

RELATED Emily Deschanel Pregnant: Will Bones Also Write In Baby No. 2 for Brennan?

TVLINE | Like nods back?
NATHAN | Oh, yeah. There’s a lot of little things in there for the audience to see, characters you go, “Oh, my God! Who’s that?!”
HANSON | The crazies who are so loyal that they notice every single line. Wonderful crazies.

TVLINE | How exciting or gratifying was it for you to do the romantic meeting again?
BOREANAZ | It’s fun. It’s a lot of time. It’s a lot of time in hair. That hair gel, I tell you, it was slick. [Laughs] It’s quite an experience, shooting in that period. It was a long shoot. It should have been 16-17 days and we did it in 14 days, and it was a lot. It was four or five days over what we normally do on a regular show. It had a lot of challenges, but it’s going to be very entertaining.

TVLINE | Was there anybody you couldn’t get back for the episode that you really wanted?
NATHAN | Yes, everybody who’s not in it, we wanted them to be in it, too. Ideally, everyone should have been in it. We just had logistical problems, scheduling problems, and it wasn’t possible.
HANSON | Budget problems.
NATHAN | But there were people who it was painful not to put in the show.
HANSON | How much longer than the average show was it, Stephen, to shoot the episode?
NATHAN | Four or five days longer.
HANSON | So approximately 50 percent.
NATHAN | It was the equivalent of shooting a pilot in the middle of our season. It was a pilot. Because it was huge. We weren’t allowed to use our permanent sets. But that’s another thing, the viewers who are really loyal viewers will see that the locations that we’re using, they’ve seen before. They just look different. Everything just looks a little odd and a little off.