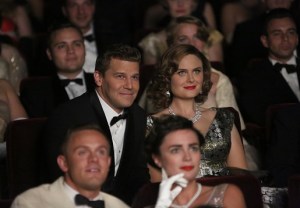 Well, that was a beauty.

Bones unveiled its 1950s-set, Hitchcock-inspired 200th episode on Thursday night, and the combination of old Hollywood glamour and intrigue was simply stunning.

Somehow, director David Boreanaz was able to replicate the classic look of films like North by Northwest, kicking things off with an unusually quiet, picturesque sequence of jewel thief Booth and detective Brennan driving along the highway.

There were also lots of treats for longtime fans as the actors took on new characters — Pelant as a waiter! Aldo as an antagonistic Interpol officer! — and some cheeky, retro-ish dialogue (“Booth is a dreamboat I’d like to take a sail on,” Angela declares).

But as fun as the escapist episode is, there isn’t anything to tie it into the series’ current storylines. So rather than recap the plot, I present my six favorite highlights, with commentary from the cast and producers. 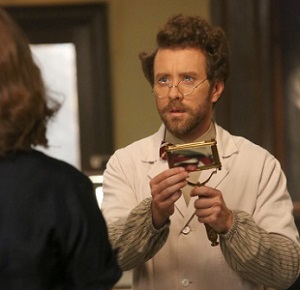 HODGINS’ COIF | I won’t soon forget the hair Jack sports in this episode. The part was so dramatic, I legitimately thought for a second that it had been created via CGI wizardry. “That’s my real hair!” T.J. Thyne confirms. “I kept growing it and growing it. I kept trying to convince them to do a very Gene Wilder-type, Young Frankensteinish [style]. But we didn’t want to go too far. So we pared it down. Amazing Meg, who does my hair, she and I sat down and came up with that concept, and David [Boreanaz] was game for it, as was [executive producer] Stephen Nathan, so we went for it.”

THE OPENING | The black-and-white premiere opening, with Emily Deschanel and Boreanaz getting their handprints cemented at the famous Grauman’s Chinese Theater, is a very touching tribute to the show’s stars — “We couldn’t ask for anything more than this testament to their great and enduring talent,” the voiceover announces – and their chemistry. Creator Hart Hanson explains that the bit was the idea of the drama’s current showrunner. “That is total Stephen Nathan,” he says. “He loves show business. He’s always loved show business. So he wanted to start on a black-and-white reel and then go to the color of a premiere. It’s a love letter from Stephen to Bones, but also to old timey moviemaking and all that glitz and glamour that pulled him into the business.”

THE FIRST GLANCE | If I had to pick one scene in a sea of pretty to single out, it would have to be an early one so expertly staged by director Boreanaz, I imagine it’ll be all over Tumblr in seconds. And it also happens to be Hanson’s favorite: “I’m a sucker. The moment when Booth has broken into the mansion, and she comes out up top and he’s down below, and they catch each other’s eyes, I just said, ‘Oh, this is going to work. This is going to be terrific.’”

HODGINS & ANGELA ALWAYS | The duo may have not be a couple in the episode, but true to Michaela Conlin’s words — “Jack and Angela always find each other, in whatever era we’re in” — the sparks between the two are undeniable. “The golden ratio is hard to argue with,” Hodgins says of Angela’s beauty, and if you don’t swoon a little, well, what’s wrong with you?! 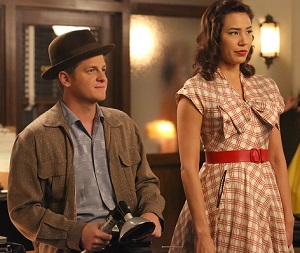 THE LOOK | A big round of applause to the hair, makeup, costume, props, etc. departments, who crafted a gorgeous episode. “I really loved the scene with Booth and Brennan in her apartment,” Conlin shares. “I thought the set decoration was incredible. That was when I really realized what we were doing. It really hit me… We were in hair and makeup for a very long time. But I thought they did an incredible job… [With] the dresses, the waists were very tiny, so I was excited when the episode was over so I could breathe again. But I loved it, because it changes the way you move. The whole thing felt very special to shoot.”

BAD GIRL CAM | After years of solving crimes and bringing the guilty to justice, Tamara Taylor got to feel what it’s like being on the other side of the law, and she lapped it up. Portraying the villain “was so good!” she says. And to think: It almost wasn’t meant to be. “Originally, I actually was not supposed to [play the killer]. Things got moved around just based on logistics and availability. I think I was supposed to play the lounge singer.”

Bones fans, what were you favorite parts of the 200th episode? Grade the hour via the poll below, then hit the comments with your picks.