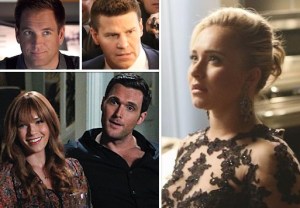 How will Nashville handle a pregnant pause? Who’s making a Mentalist homecoming, and when? Which princess will Once Upon a Time conjure next? Who rides to Five-0 fave Danny’s romantic rescue? Read on for answers to those questions plus teases from other shows.

Do you have any scoop on The Mentalist? –Sissy
Not only can I confirm that Owain Yeoman and Amanda Righetti will be returning during this final, 13-episode season as Rigsby and Van Pelt, but I can with precision accuracy nail down for you when — during the two-hour series finale, airing Wednesday, Feb. 18.

Hello Matt, do you know who is going to die during Once Upon a Time‘s midseason finale? –Marko
Let us focus on the living, Marko! (That’s my way of dodging the question to instead tell you about the role being cast for Episode 15. The ABC series is seeking an African-American actress to guest-star as “Miranda,” a 19- to 22-year-old princess. Described as ” warmhearted and passionate,” this lass wants nothing more than to bring peace and beauty into the world. Yet beneath her gentle exterior, she is headstrong and full of grit – so if you cross her, you may find her more terrifying than even the most powerful kings. Did I mention she has a lovely singing voice, as well?)

How does Nashville plan on handling Hayden Panettiere’s real-life maternity leave? Did they find a way to incorporate her into every episode ahead of time, or will there be episodes where Juliette Barnes will not be seen? –Sharon
“We did bank some material for a few episodes,” showrunner Dee Johnson confirms for TVLine. “She may be out of one or two. It all depends on how quickly [Hayden] wants to come charging back to work.”

Is NCIS‘ Tony going to be in a stable relationship this season? –sshenoy
You mean with, perhaps, ATF Agent Zoe Keates? I can confirm that Marisol Nichols has been booked for an early 2015 encore, while Emily Wickersham recently acknowledged to me that Tony and Zoe had “really great chemistry.” She added, “Tony’s love life definitely unfolds. I can say that.”

Are NCIS and NCIS: New Orleans on hiatus at the moment? If so, when do they recommence? –Sharon
Au contraire, Share! NCIS, NCIS: NOLA and NCIS: LA all have Christmas episodes to put under your tree (or menorah, where applicable) this coming week. Then they go on break, returning the week of Jan. 4, 2015.

Got anything interesting on Hawaii Five-0‘s Danny? –Sarah
Poor Detective Sergeant Williams. Love never comes easy for him, especially when an upcoming romantic getaway goes awry, and Steve needs to ride to his brah’s rescue.

Supernatural fans need some scoop on Dean, please! —Luann
Witchy Rowena didn’t come into contact with the hunter in the fall finale, but that could soon change given her son Crowley’s connection to Dean. “I think most mothers like to interfere in their children’s business,” her portrayer Ruth Connell says. “So Rowena gets to do that in the episodes to come.”

Long time no news on Bones‘ Cam – care to fix that? –Taissa
Cam and Arastoo’s relationship is hitting a long distance snag. “[They] have a little adventure going on,” Tamara Taylor previews. “Arastoo is going to go back to Iran to take care of his ailing brother. That’s going to be a little intense and dramatic. I think more than anything, she’s just nervous that he’s not going to be able to come back.”

Bones’ Booth has been through a hella lot — jail, FBI betrayal, Sweets’ death, PTSD, and IMO it’s all got dealt with too neatly and quickly. Will there be more fallout from this at a later date? —Mark
There could be more hard times ahead. “I don’t know if the season will end on a very happy note,” David Boreanaz muses. “We’ll see.” Meanwhile, creator Hart Hanson hints that a major twist could be on its way (and possibly the cause of that unhappy conclusion?). “If we have to go to an 11th season, then, in my opinion, that means we have to reinvigorate the series and make some big changes,” he says.

Would you have some Scorpion scoops to share with us? This show really rocks with such an awesome cast. –Marla
EP Nick Wootton surveyed for us the growing Walter/Paige “connection,” saying: “Walter has his questionable emotional quotient, and Paige has been burned before and doesn’t want to proceed without her son’s best interests at heart.” As such, the show will take “a real touch-and-go approach” to that twosome and end Season 1 “with a big cliffhanger.”

Anything on Hart of Dixie? –Hannah
You may already know that in the Dec. 15 season opener, Zoe goes after Wade, Lemon returns early from her cruise and there’s a surprise visitor for Brick. But beyond that, Mircea Monroe’s Tansy is coming back, in Episode 6! But with that comes some bad news for certain ‘shippers. “I don’t feel like there’s still a hope for Tansy and George,” creator Leila Gerstein reveals. “She’s back in a completely platonic capacity, but for a really important storyline. She’ll also get her own version of happiness this year.”

Loving Brandon Routh’s Ray Palmer on Arrow. When can we expect him to suit up as The Atom /A.T.O.M.? –Cassie
Hurry and read this, the episode’s almost on! “You will get a proper look at the A.T.O.M. exosuit in Episode 9” aka tonight’s winter finale, says EP Marc Guggenheim. “I say ‘proper’ to distinguish from the ‘look’ that leaked on the Internet this week. Some international promo included a shot of what purported to be the A.T.O.M. suit but in fact was not at all the A.T.O.M. suit.”

Real questions, real answers. If you need the Inside Line on a favorite show, email InsideLine@tvline.com! (With reporting by Vlada Gelman, Andy Swift and Rebecca Iannucci)