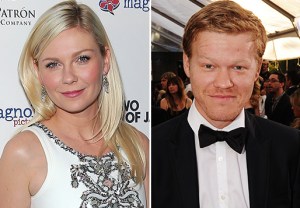 Kirsten Dunst and Jesse Plemons headed to Fargo? You betcha!

Dunst will play Peggy Blomquist, “a small town beautician with big city dreams who is trying to figure out who she really is and what she really wants as she struggles with traditional societal expectations.” Plemons will play her husband Ed, “a butcher’s assistant who wants to be supportive of his wife’s self-discovery, even if he doesn’t quite understand it.”

Jeffrey Donovan (Burn Notice) and Nick Offerman (Parks and Recreation) reportedly are also being eyed for Season 2 roles, though FX has confirmed neither.

Fargo’s first season, which netted 18 Emmy nominations, was inspired by the Coen Brothers’ 1996 film of the same name and followed the fallout caused by murders in the Minnesota city of Bemidji.

FX also released a logline for Season 2: “Fargo’s new chapter, which will unfold over the course of 10 episodes, will travel back to 1979 in Sioux Falls, South Dakota and Luverne, Minnesota, where a young State Police Officer Lou Solverson (yet to be cast), recently back from Vietnam, will tackle an all new ‘true crime’ case. Solverson’s wife, Betsy, (yet to be cast) their four-year-old daughter, Molly (yet to be cast), and fellow officer, Ben Schmidt, (yet to be cast) will also be featured in the new installment.”

Season 2 will be influenced by the Cohen brothers’ Fargo, Miller’s Crossing and The Man Who Wasn’t There, executive producer Noah Hawley revealed at the show’s TCA panel in July. With the shift to 1979, a younger version of Keith Carradine’s character Lou Solverson, aka the father of Allison Tolman’s Molly, will be introduced. It was established on the show that in 1979, he worked on a Sioux Falls task force with one-day Duluth police lieutenant Ben Schmidt. The Lou that viewers meet in 1979 is a 33-year-old man recently returned from Vietnam who “thought he’d left the war behind and here it is, it’s domestic [now].”

* Molly’s mother will be introduced and fans may learn what happened to her, Hawley teased. Could Tolman possibly play her alter ego’s own mother? “I haven’t considered it,” Hawley admitted. “It seems a little gimmicky to me and like cheating. It’s something that’s certainly worth thinking about.”

* “Minnesota [and] North Dakota, that region is a character in the show,” Hawley said. “That’s part of the personality. Believe me, we would do Fargo, Honolulu, if we could get away with it. But we can’t.”

“It’s about strong women,” Hawley teased of the second-season setup when TVLine’s Michael Ausiello interviewed him (alongside fellow EP Warren Littlefield) on the 2014 Emmys red carpet (see the full Q&A below).

Excited about Dunst and Plemons climbing aboard Season 2? Sound off in the comments!