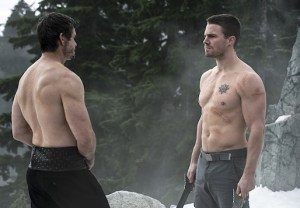 Oliver Queen is going to need a holiday, badly, after the events of Arrow‘s winter finale (airing tonight on The CW).

Having thus far eluded the wrath of League of Assassins overlord Ra’s al Ghul (played by Matt Nable), Oliver (Stephen Amell) will be delivered a message by Nyssa: Find League member Sara’s killer within 48 hours, or the people of Starling City will be executed, one by one.

And though Team Arrow has already worked diligently to find the person who silenced Canary, this challenge is not to one shrugged off. Says showrunner Marc Guggenheim, “The thing about the League of Assassins, but particularly Ra’s al Ghul, is that when he sets a deadline, you don’t get the opportunity to dismiss it as unreasonable.”

Regardless of what if any new intel Oliver, Diggle, et al are able to turn up, it all builds to a grand set piece well promoted in teasers and photos, as Oliver and Ra’s face off atop a snowy mountain using nothing but their brute strength (and swords, for good measure).

Versus Oliver’s previous clashes with Slade Wilson or Malcolm Merlyn, “This is a very different kind of fight,” Guggenheim says. “With Malcolm, it was a battle between two archers. And With Slade, it was an archer and a killer.

“This is very mano a mano,” he continues. “And it’s a sword fight, which is not something we’ve done with Oliver before.”

Superficially, the showdown also boasts a “cinematic venue,” as Guggenheim puts it — one that Mother Nature rendered unexpectedly Christopher Nolan-y. “Obviously we picked the location for its remoteness and epic quality,” Guggenheim notes, “but truth be told, the weather was not cooperative that day. It was less ‘Nolan-y’ and less grey if the weather was cooperating, but it was incredibly rainy and foggy. But when you shoot in Vancouver, that’s the trade-off you make!”

Further surveying the aesthetics of the fight, Guggenheim points out, “Oliver and Ra’s, with their shirts off, is a very intentional nod to the Neil Adams[-created] Batman/Ra’s al Ghul duels from back in the day.”

On the far lighter side of things — yet also related to Sara’s tragic death — the winter finale also finds Dinah Lance (returning guest star Alex Kingston) paying Laurel a surprise visit, courtesy of Quentin. In other words, Laurel now will need to keep that dark secret from both of her parents.

“The look on Katie Cassidy’s face, when Laurel discovers her mom is back in town, perfectly encapsulates, ‘Oh, no. I’m in trouble now,'” Guggenheim shares with a chuckle. Is there a theoretical scenario where Laurel in fact confides the sad truth in her mom while still sparing Quentin? All Guggenheim will say is, “There’s an outcome to that story that perhaps you’re not expecting.”

As the hour fades to black, given the 59 minutes that came before it, Guggenheim says that viewers will be saying — pardon the cliché — “‘What the f–k?!’ That’s the best way I can put it. In the very final moment, we go to a place that no one is expecting us to go.”

All told, he hails the winter finale as “a really big turning point” and a “pivotal” episode, adding: “So many big things happen that Episode 10 was designed to just deal with the aftershocks. And when you need an entire episode to deal with fallout, you know that quite a bit has happened!”