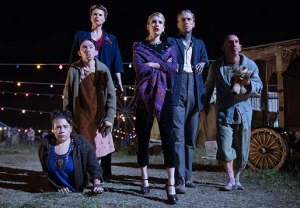 Since American Horror Story: Freak Show characters have begun dropping like flies (of the Vincent Price variety), we went into “Tupperware Party Massacre” well aware that the season’s body count was likely to rise again. (The episode’s title was also a pretty big clue. Hello?!?)

But what we couldn’t have predicted was just how much creepier Dandy was going to get. (After last week’s bloodbath, who even thought he could get creepier?) Are you ready for this?

FUTURE TENSE | The hour opened with Dandy – recently having stitched together his mother and an ill-fated Avon lady’s head into a gruesome puppet version of Dot and Bette! – overpaying Maggie for a reading. After she reassured him that his sins would soon be forgotten and he’d “go on just like before,” a drunken Jimmy spotted the psycho leaving the fairground and accused him of being Twisty’s accomplice. In response, Dandy sneered, “I’m your god, Jimmy,” and because the lobster boy took away the Tattlers, “I’ve decided that you need to suffer.” (Yikes!)

STRANGE BEDFELLOWS | While tall, dark and handsome Angus T. Jefferson showed up looking for secret lover, Desiree, grieving Jimmy alternated between boozing it up and screwing Ima. When Maggie caught them going at it, her ex sang his new squeeze’s praises. (Apparently, she “tastes like a lemon-lime lollipop.”) Futilely, Maggie tried to make Ima see that Jimmy was so blotto that he didn’t care who or what he was shagging. “You could be a pillow, a donut, a sock,” she noted. In defense of his new friend with benefits, Jimmy… puked. (And they say chivalry is dead.)

PARTY SLASHER | Later, the lobster boy attended one of those sexy Tupperware parties at which his flippers are always making a few extra bucks. Unfortunately, he was so soused that he saw a vision of Ethel (in which she accused him of being just like his father) and got himself kicked out. Immediately after, Dandy came a-knockin’. Easily gaining entrance with a lie about a broken-down car and a compliment about the hostess’ dress, the nutso wasted all the housewives, dumped the bodies in the pool and went home to draw a blood bath.

At Mott mansion, Regina informed Dandy that she had called in reinforcements to investigate her mother’s disappearance: the police. Unfazed, the enfant terrible confessed that yes, he’d killed Dora, Gloria and a buncha other people, too. “Take a bath with me, Regina,” he then said, “like when we were little.” (Erm… ) After she declined – even though he promised not to kill her – he was so angry that he called her “a hideous, predictable bore” and threw her out.

Naturally, Regina soon returned with the police. But once again, Dandy wasn’t the least bit frightened. And, it turned out, with good reason. He’s so rich that all he had to do was offer the detective a million bucks to do away with Regina for him, and bang! She had a bullet in her forehead!

ANY WHICH WAY BUT NOOSE | Back at the freak show, Dell – haunted by Ma Petite’s murder, egged on by a vision of Ethel, ashamed to be a freak (gay) and possibly shell-shocked from the sight of Stanley’s monster penis – wrote a suicide note and hung himself. He would’ve died, too, had Desiree not burst in at the last second.

BREAKING UP IS HARD TO DO | Tracking down the Tattlers, Stanley lied to the girls (and, for that matter, Elsa) that he’d gotten hold of the doctor that Dot wanted to separate them. Assuming that it was curtains for one of them – if they only knew! – Bette tearfully told Dot that she was willing to sacrifice herself for her sister. Moved, Dot decided that they should stick together after all. Hightailing it back to the freak show, Dot tearfully admitted to Jimmy that she was in love with him and always had been. “You are the only man for me,” she said. “You’re like us – different but special.” As for Bette, she assured the lobster boy that she could give them privacy. Besides, Dot noted, “not many men can boast of a blonde and a brunette for a wife.” Alas, Jimmy claimed to be in love with someone else and turned down the proposal. Moments later, he was arrested for the murders of all of Dandy’s Tupperware party victims.

OK, your turn. What did you think of the episode? Who do you think will survive the season? Hit the comments!