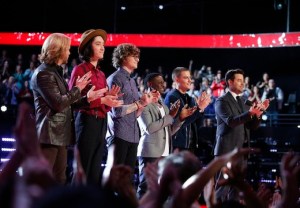 You can’t accuse NBC of underestimating the power of cross-promotional synergy.

With The Voice rocking the 18-49 demo and its venerable Today struggling to get out of No. 2 in the morning-show ratings, the Peacock net made a bold move with its reality-singing juggernaut’s semifinal results telecast: Nope, you won’t know identity of the fourth and final Season 7 finalist unless you wake up with Matt Lauer, Savannah Guthrie and that collection of other folks who use international news as the aoli in a pop-culture and cooking-segments sandwich.

I’m not kidding. Host Carson Daly taunted the Voice audience with these very words at the top of the episode: “I will reveal the fourth finalist tomorrow morning on the Today show, which you all should be watching anyway!” Carson, pleeeease! (Our congenial host also prattled on about something called “Starbucks for Life,” but I suffered an acute case of unconsciousness-by-disinterest.)

Weirdly, while the Wild Card twist made this week’s results show the most compelling (musically speaking) this year, it also relegated the season’s biggest stars (aka the Top 3) to afterthought status — announcing their success with the viewing public in the opening minutes, then having them escorted off the grounds by the same security guard who dragged Christina Milian from the social-media box at the end of Season 5. (I kid! I kid!)

Anyhow, enough of my editorializing, yes? Let’s get to the action: 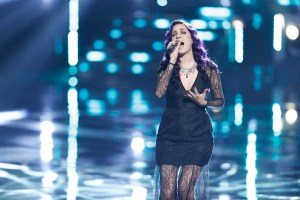 I summed up my feelings about the Wild Card via Twitter, because you can be over 40 and still relevant from a social-media standpoint, dammit!

Sugar was best tonight, but DaNica has the strongest overall body of work. Tough call. #VoiceWildcard

On that cray-cray note, I turn things over to you. 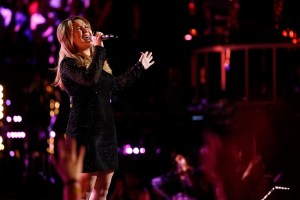 What did you think of the Season 7 semifinal results show? Did America choose the right Top 3? (Um, pretty much yes, thanks.) And who gets your vote for the Wild Card? Take our poll below, then sound off in the comments!