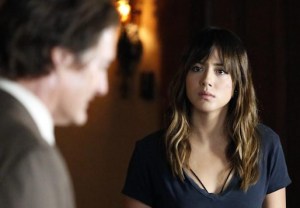 Much knowledge was dropped on Tuesday night in the Agents of S.H.I.E.L.D. midseason finale, including significant details about Skye’s identity. Yet as the thrilling hour drew to a close with one character emerging triumphant, another’s life came to a tragic end.

BOMBS, AWAY! | The action picked up with May using some aerial razzle-dazzle to dupe HYDRA into thinking its squadron had landed direct hits on the Bus. The team then prepared to return to the alien city in Puerto Rico to plant old-timey, EMP-resistant bombs.

Meanwhile, Ward endeavored to explain to Skye that while his official target was Raina, bringing Skye in was his own idea, to make good on his promise to introduce her to her father. The family reunion, however, is less than warm-and-fuzzy, as Skye kicks things off by noting that “a trail of death” follows Daddy Dearest. The Doctor, however, is visibly moved to see his daughter before him. Introducing himself as Cal, he explains how his world fell apart the day she was stolen from him, how sorry he was that he couldn’t be there for her, to “teach you about the stars.”

Skye writes Cal off as crazy and creepy, even more so given his alliance with Whitehall. Cal contends that he merely used the ageless Nazi to find his little girl. “Your mother came from a line of people who had gifts. I brought you here to receive yours, your birthright,” he says. Then, quoting from Are You There, God? It’s Me, the Obelisk, he adds: “There’s a change that has to happen.” Cal details how he worked with her mother at a clinic, until one day men came to take her. By the time he tracked down his love, Whitehall had “cut her to pieces” for experiments, leaving the leftovers in a ditch.  Now, having met his daughter, all that’s left on his to-do list is “to kill the man who destroyed my life” — aka “Best. Day. Ever!”

Back on the Bus, Coulson directs Agent Koenig (not that one, the shorter one) to initiate the (gulp!) “theta protocol” if need be, while the team discovers that HYDRA is on site just above the alien city’s entrance, using a (very cool) plasma drill. The plan: Bobbi and Lance (who have a fleeting chat about her mysterious thumb drive) will derail the drillers while Tripp and FitzSimmons plant the old-timey bombs throughout the tunnels.

OOPSY, DAISY | Cal’s bloodthirst for Whitehall is interrupted when the HYDRA baddie rounds everyone up, questioning Skye’s usefulness to their cause. Skye lays hands on the obelisk, unharmed, then swiftly uses it to incinerate one of Whitehall’s goons. “I hope you are as special as your mother,” Whitehall purrs. When he then questions Ward and the mixed messages he’s been sending regarding his loyalties, Raina explains that S.H.I.E.L.D.’s black sheep is operating from a place of “love,” for Skye. Still, Whitehall has the entire lot of ’em detained. Volatile Cal eventually overrides the neutering implant in his neck, KO’s the guard and squares off with Whitehall — but before he can tear him limb from limb (which could have been some great TV!), Coulson guns down the HYDRA honcho. Cal is livid to be cheated out of delivering a long-brewing comeuppance, so he begins whaling on Coulson.

After Ward himself wrests free, he releases Skye — who turns around and shoots him, several times: (“Never turn your back on the enemy,” she reminds.) Skye arrives in time to stop Cal’s bloody pummeling of Coulson, then offers “Dad” this one chance to walk away alive. “I’m not going to ‘transform’ or whatever,” she declares. He begs to differ. “I’ll wait for you,” he says. “I will always love you, Daisy.” :-O

‘WHAT DO WE BECOME?’ | The rest of the finale takes place in the tunnels, where Coulson is chasing after Skye (…who is chasing after Raina and the obeslisk), while Tripp scrambles to undo all the bombs he planted, lest the team get killed in the implosion. Skye ultimately finds Raina inside a special chamber with a mystical pedestal at its center. “I knew you’d come,” Raina smiles. “Our whole lives have been leading to this moment.” As she spins it, “Whitehall had it all wrong — [the obelisk] doesn’t destroy. It gives new life. Let’s find out: Who do we become?” The obelisk then levitates out of Raina’s hand and onto the pedestal. Tripp races inside the chamber just before the giant stone doors seal closed. As the obelisk folds open and eventually unleashes a pulse of energy, a seemingly organic material quickly envelops each of the women. Tripp fears the worst… until Skye begins to wiggle free from her “cocoon.” Then in a swift moment, she triumphantly burst out of her shell, seemingly renewed… or something. Alas, an obelisk shard had hit Tripp, who is reduced to a pile of dust.

Then, in the post-credits tag…. we see a mysterious figure in a strange room with a different, pulsing obelisk. “Are you seeing this? There’s someone new. Tell the others I’m on it,” he says on the phone,  a swath of featureless skin where his eyes should be

You’ve got questions, and I’ll have some semblance of answers — at 10 pm PT, when I publish my winter finale post mortem Q&A with S.H.I.E.L.D. bosses Jed Whedon and Maurissa Tancharoen.