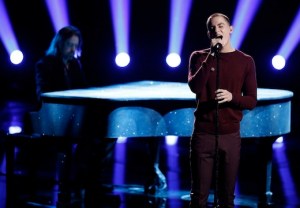 Are your Facebook friends stressing you out with ominous updates like, “Holiday shopping is DONE” or “Look at my completely completed Christmas decorations”? And meanwhile, your life’s poetry is “The stockings were buried/ In the closet sans care/ Now you can’t find them/ So the mantle stays bare.“

Fret not: The Voice has got you covered!

Sure, Season 7 has reached the crucial semifinal stage — America will whittle the Top 5 down to a Top 3 on Tuesday’s results show, then save one ousted member of the Top 12 via Wild Card — but the good news is you can now fast-forward through all of the coaches’ critiques without missing anything of any import whatsoever guaranteed. See, more time for visions of sugar plums and all that!

Oh, sure, watch in real time if you want Variation No. 734 on Blake Shelton’s “I’ve never heard a more perfect vocal on this stage” or Gwen’s umpteenth “you sang it good.” (Oh, the grammar!) Pharrell is almost certain to be on his feet for every other performance, and Adam… well, let’s just say People’s Most Tattooed Voice Judge Alive is engaged in a fascinating and at times violent struggle against the concept of sincerity. (It doesn’t make for very interesting television, surprisingly enough.)

The point is, with all four panelists behaving like Bambi’s mother to the contestants’ salt licks — “OMG! BEST EVER! CAN’T WAIT TO BUY YOUR ALBUM (EVEN THOUGH I WON’T SO MUCH AS GIVE YOU A RETWEET WHEN IT COMES OUT ON ITUNES)!” — there’s nothing left to listen to but the actual musical performances.

And that’s not such a bad thing. To vote for a contestant to make it to the Season 7 finale, you’ve got to have heard something in their body of work and/or in tonight’s two-song set to make you think you might follow them into their post-Voice careers (however much you think a post-Voice career is as real as the Easter Bunny or the Tooth Fairy).

To my ears, only two singers erased all doubt that they deserve berths in next Monday’s finals. Which means Tuesday’s results show will have something that’s been in short supply these last few months: a real sense of suspense. On that note, let’s get to my letter grades for the evening’s performances (bearing in mind I’ll be back overnight to update this recap with more detailed reviews):

Damien (Team Adam) — Michael Jackson’s “She’s Out of My Life” — Grade: B- | I worried Damien would bludgeon MJ’s tender melody with 10 tons of melisma, but he showed a lot of restraint in the vocal — even if he hit a patch of wobbly notes heading into his falsetto flourishes. Still — and this is a tricky thing to articulate — I always feel like there’s a lack of specificity to Damien’s delivery, a pantomime of emotion where you want real feeling. I wish Adam would make Damien sit with his lyrics for a full day, study them and apply them to his own life, before he’s allowed to sing even a note of the melody, but I guess it’s a little late in the season for that.

Craig Wayne Boyd (Team Blake) — Merle Haggard’s “Workin’ Man Blues” — Grade: C+ | I’ve pinged Pharrell for some questionable arrangements this season, so it’s only fair that I pose this question: What in ’70s Vegas revue hell was Blake thinking by giving his potential country chart-topper such a dated, chintzy backdrop to his performance? Craig ended up playing into the hokey karaoke vibe the band was throwing down, too, raising his paws to act out the “working long as my two hands are fit to use,” and lazily swallowing ends of phrases like there was an All You Can Eat Wings Buffet just to the left of the stage. This was, at best, Top 12 or Top 20 Week material – hardly worthy of a dude who’s paid all his dues and is just a few performances away from a major label deal.

Taylor John Williams (Team Gwen) — The Swell Season’s “Falling Slowly” — Grade: D- | I’ll admit I raised an eyebrow when I realized Taylor was set to cover yet another song brilliantly performed on Season 8 of Idol — I mean, I loved Kris-Adam-Allison, too, but I don’t mention them in every recap — but the real “Rated W…for Whaa” Moment came when the opening verse exposed some serious structural weakness in Taylor’s lower register. I’m not sure if the arrangement was pitched too low, or if the Amish Hipster was fighting a sore throat, or if he’s merely been excelling at tracks with a limited range, but the struggle continued — actually, worsened — when he tried to reach into his falsetto during the song’s second half. “He’s adorably cute!” raved Adam, as the crowd of young girls in the audience shrieked in delight. PEOPLE, VOTE WITH YOUR EARS, NOT YOUR EYES! Sorry, rant over.

Matt McAndrew (Team Adam) — Ed Sheeran’s “Make It Rain” — Grade: A- | Let’s be honest, the Season 7 semifinals didn’t really begin ’til Matt took the stage in a snazzy gray and white striped blazer and tore into a recent Sons of Anarchy soundtrack cut with palpable passion and gorgeous grit. When this guy is good, he is really, really good — giving you chills when the band takes a sparse approach, and still commanding attention when they’re rocking out full-blast. Am I crazy, or would it be kinda cool to hear the guy cover some Jim Morrison for next week’s finale? (Oh, c’mon, we all know he’s going to advance, right?)

Chris Jamison (Team Adam) — Maroon 5’s “Sugar” — Grade: A- | Raise your hand if you think somehow Adam subtly (or not so subtly) was the first to suggest that his brand new single might be a killer choice for his hunky protégé’s second-to-last week on the show? OK, I’m cynical, but that doesn’t mean I’m wrong! Nevertheless, Chris slipped into the jam’s seductive grooves and extended falsettos as comfortably as Adam slips into his $500 bowling shirts. I could’ve lived without the line of Robert Palmer girls flanking Chris, but it says a lot for his personal charisma that I barely registered their presence ’til the very end of the performance.

Damien (Team Adam) — Paula Cole’s “I Don’t Want to Wait” — Grade: B+ | Poor Damien! The producers scramble the contestants’ performance order between their first and second songs, and yet he still winds up having to go first? You don’t have to be a conspiracy theorist to figure out the math: X = It’ll Take a Miracle to Save Him on Tuesday. That said, while his cover of the Dawson’s Creek theme isn’t exactly burining up TVLine’s poll, I enjoyed the way it showed how Damien can do more than ballads, and how he’s capable of taking a song completely outside his comfort zone and painting it a different color (a skill set that was in short supply tonight). Gwen, in one of her more astute critiques, noted the Peter Gabriel-esque percussion (I wrote “Paul Simon’s Graceland” in my notes, but her reference was better) — and the end result of it was a more hopeful, less plaintive mood. Was there a little strain in the final chorus? Sure. But at least dude isn’t headed back to the airport — to go home, not to go back to his day job, hopefully! — without having taken a risk.

Matt McAndrew (Team Adam) — U2’s “I Still Haven’t Found What I’m Looking For” — Grade: B | Do we praise Matt for delivering U2’s most anthemic, roll-down-the-windows-and-belt-it ditty with conviction and purpose? Or do we give him a demerit for imitating pretty much every single note and inflection as if he was competing in a Bono sound-alike contest? I’m going to vote to split the difference: It was color-by-numbers, but really pretty color-by-numbers — and that beats the heck out of somebody slopping paint onto your living room floor.

Craig Wayne Boyd (Team Blake) — “The Old Rugged Cross” — Grade: B+ | I’ll admit that out of every song in a Protestant hymn book, Craig chose my absolute favorite. (Fun fact: This is the one song my mother insists must be played at her funeral someday, which is probably why I have such an affection for it.) But if you’ll allow me a tiny gripe, I really wish Craig had sung it a capella. I mean, yes, the Nashville vet delivered the lyrics with a conviction and growl we haven’t heard since “I Walk the Line” in Top 10 week, but why did the background music make it sound like Paul Mirkovich and the Voice band had been replaced by elderly session players from the Lawrence Welk Show? The raw honesty of Craig’s emotion still percolated to the surface — I just wish it hadn’t had to make its way through a gallon of bargain brand maple syrup to get there.

Taylor John Williams (Team Gwen) — Taylor Swift’s “Blank Space” — Grade: C- | Taylor’s vocal accuracy was marginally better on his second number of the night — except for that badly botched final glory note — but how come not a single coach remarked on the part where he completely blanked on his lyrics and had to look over to the backup singers for help? I mean, the contestant himself was expecting it — “Coaches,” he groaned, before his critiques began — but nope, all we heard was “you’re a true artist” and “no one else does what you do.” I’m not sure if Taylor is uncertain that he actually wants the Season 7 crown or if there’s a simpler explanation for his total semifinal collapse, but he performed “Black Space” with less enthusiasm than my three-year-old twins facing down a new species of vegetable. “I don’t want it!” Nope, kids, neither do I.

Chris Jamison (Team Adam) — Bruno Mars’ “When I Was Your Man” — Grade: A | From the charisma defecit of Taylor to the “Whoa, this guy could really be a pop star!” excitement of Chris… talk about a tonal shift. Accompanied only by a piano, Chris managed to fill the entire venue his range-y, vocals — from his expectedly lovely falsetto to his clear, booming lower register. For a minute, this felt less like a Bruno Mars cover and more like a tale of Chris’ own ill-fated love affair — which is about the best thing you can say about a reality singing competition performance, no? This wasn’t merely the performance of the night, it may have been the performance of the season.

On that note, it’s your turn. Who were your favorites from tonight’s Season 7 Semifinals? Who deserves a spot in the finale? Who’s going home? Take our poll below, then sound off in the comments!